My situation was very serious but still stable but unfortunately I made a mistake, to try Vitamin d3 (Dibase Cholecalciferol 50.000Ui) a single dose and I got seriously worse. Since I had a total loss of muscle-bones, I decided to try the vitamin in question. Within half an hour of taking it I had a worsening of all neurological, physical and sexual symptoms. After 4 days I wake up one morning with new symptoms I list:

I feel like I’m dying, like I’ve lost the electrolytes and my stomach has “broken off”. I know it sounds absurd but that damned Vitamin D3 must have given me an Estrogenic version of PFS, I can feel it, I have something at the ER receptor. Otherwise my new symptoms are not explained. Cholecalciferol is transformed into Calcitriol the active form of Vitamin D3 and this appears to be an Aromatase inhibitor and a subregulator of the ER receptor.

The same thing happened with a Saw Palmetto PFS guy using Aromatis:
The symptoms he describes are practically the same and he even committed suicide.

Hello folks. I thought i would just make a post warning the risks of using Aromatise Inhibitors to alleviate some of the symptoms of PFS. In August 2015 i was experimenting with small doses of Arimidex and Aromasin. I found that my libido would return from one dosage then it would fade away. I tried many dosing protocols and ended up taking too much Aromasin. I lowered my Estradiol too far and suffered the effects of estradiol deprivation for a short period of time. About a week after cessatio… 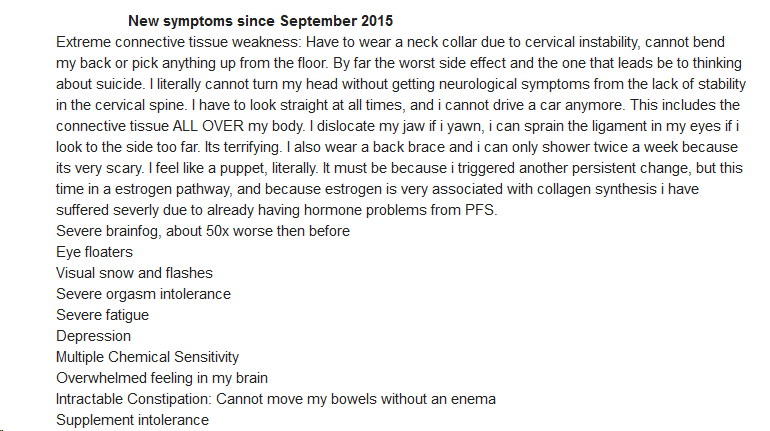 The same happened to another boy Konflict with Vitamin E.

So I am not surprised if the same thing happened to me with Vitamin D3.
And the problems of connective tissue-collagen is due only to estrogen.

I don’t think it’s an increase in free Testosterone to cause me this.

Since the E2 exams are fine, I think about the ER receptor.
I really don’t know what to do, I thought to try Eutirox.

A dose that dose of Vitamin D3 was fatal.

I believe they are in the same direction as douglasmich.

2 Likes
I fuck totally my life
Anyone crash on Vitamin D or after use??
Joint problems caused by Finasteride (hypermobility)
My experiement with Vit D (after 5 years) -- getting near 90% folks
Skin change after fin use? Does 5 ARI really affect certain people?
Padding on hands and feet
Zadig777 is Dead
Dubya_B split this topic May 3, 2019, 3:15am #2

29 posts were merged into an existing topic: Crashed Vitamin d3