The use of Collagen

Have you tried the CDnuts protocol?

Yes, I’ve had very dry and cracked hands for years. I added L-Proline and L-Lysine

Hi alteredlife. I just found out skin is made in part of collagen, and when we buy pure gelatin at the grocery store, we buy 100% pure collagen.

I just bought 100,000mg of the following amino acids for a few bucks. It includes Proline and Lysine, as well as glycine and glutamine. Not as good as hydrolyzed peptides, but easier and cheaper to find. 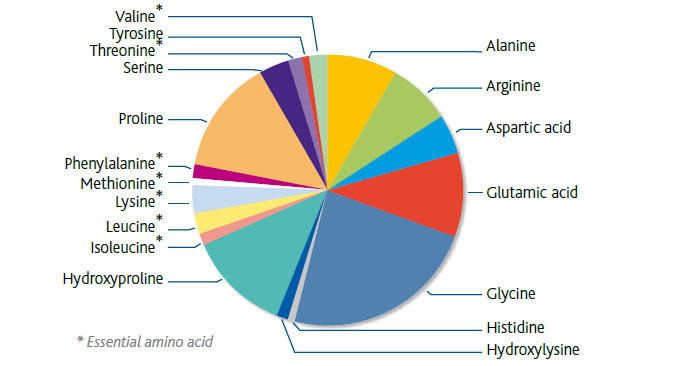 Straight to the skin, which may mean good bye wrinkles and dry skin. This may interest you @Go_Faster_Sonic

I’m not saying it’s a miracle or anything, but I’m going to try it right away.

I’ll keep you posted. (I say that all the time and I haven’t posted anything: I still haven’t received my amino acids from the US yet.)

Wow hydrolyzed peptides contain almost all of the aminos m. I just bought come collagen protein powder. Are the aminos I buy in bulk also hydroyzed?

From what I understand, they don’t need to. Our stomach and our guts flora breaks down most protein into their amino constituents. Amino supplements have already been broken down or can easily be.
Collagen is hard to digest if not at least partly hydrolyzed (it’s then called gelatin) or completely hydrolyzed (it’s then called hydrolyzed peptides).
All three have the same aminos content.
Gelatin has the property of fixing leaky guts which causes some autoimmune reaction to food whereas hydrolized peptides is easier to absorb and is more like a straightforward amino supplement.

Hey Ozeph, do you think this would be a good buy? Ordered some stuff off them a few years back so i guess i could try this.

Not sure how helpful it’ll be to my skin or condition but I don’t have anything to lose, I’m not sure what other things i could order? Would you say this is worth a try?
I guess even if it don’t help my skin i need something to help overall strength.

Is there anything specifically that would have everything in one package? I was considering L-histadine too but I’d rather get everything in 1 if that’s possible.

I guess im not sure if specific peptides actually do anything or if they’re a marketing gimick, I here so much mixed stuff about collagen, some people say it gets absorbed, some people say it can’t be absorbed by the stomach and then im left wondering who’s right

Collagen can’t be absorbed efficiently by the stomach.

That’s why humans have been making bone broth for centuries, If you boil the collagen for 18-24 hours, you partially hydrolyze the collagen and get gelatin as a results. Gelatin is easier to digest than regular collagen but still not as easy as 100% hydrolized collagen (also called hydrolyzed peptides or collagen peptides).

If you have a strong digestion, than I guess both have a similar result. But if you’re not sure, than collagen peptides are easier to assimilate by someone with weak digestion.

I’m going for gelatin because I’m eating lots of protein and gelatin provides a slippery coating to the guts that helps with constipation.

I think it’s interesting to note that people with leaky guts and autoimmune diseases also have some of the neurological symptoms, anxiety, insomnia, brain fog, digestive issues, joint pain etc… as pfs sufferers.

pfs sufferers have their androgen receptors working twice as much as they should, and they play a major role in regulating the immune system. An immune system that is overworking could creates autoimmune problems.

I think it’s why many of us find it beneficial to eliminate some type of food from our diet.

But I will also try gelatin and see if it makes me more tolerant to food I would normally react to. So far so good, yesterday I put gelatin in a soup that had kidney beans and carrots, both of which I have problem with normally; It went through without a problem, no anxiety or digestive issues.

Hey Ozeph, do you think this would be a good buy?

Yes I think it’s worth a try. And it would have the most chances of being absorbed by your body compared to other forms of collagen.

And if you have skin problem, I would go for collagen instead of specific aminos contained in collagen. It’s no secret collagen helps having a radiant skin, at least for normal healthy people.

So yes, worth a shot in my opinion.

I’ve been taken 10gr of gelatin (pure collagen) yesterday and took 10gr again today. I took it dissolved in a hot vegetable soup that also contains carrot and kidney beans. (Gelatin has to be dissolved in hot water before you can ingest it. I wouldn’t suggest anyone take a spoonful of the dry stuff with water, that would be looking for trouble)
Collagen composes 30-40% of all the body’s protein. 10gr a day seems a lot but actually it’s less than 30-40% of all the protein I’m consuming in a day so I think it’s still in proportion to what my body needs.
(I’ve read you can have up to 25gr a day)

This soup contains much more carbs than my diet would normally allow, so I was expecting anxiety and insomnia, but it did not happen.

According to this article I posted above: quote "Gelatin is 30 percent glycine, it’s one of the richest sources of glycine on the planet. Glycine has been shown to improve gut health by repairing the intestinal wall, and sealing the gut lining — which is essential for healing leaky gut syndrome and the autoimmune conditions that stem from leaky gut, such as rheumatoid arthritis and allergies "

I’m wondering if pfs had me develop an exaggerated autoimmune response which caused what seems to be allergies to food I used to be able to consume.

I’ll continue on my diet and slowly increase gelatin to 20 gr a day. After 2 weeks, I’ll go eat some Pizza and see if I get an allergic reaction.

gelatin at the grocery? never heard about this…

It’s in the sauce department, or the spice or food additive like agar agar.(don’t use agar agar. it’s unrelated)
You can use gelatin to thicken sauces, glaze liver paté or duck confis…

It’s one of the ingredient of Jello, but I’m talking about the pure, unsweetened, uncolored gelatin.

what is gelatin mad of? i mean, where does it come from? vegetables? animals?

sounds pretty disgusting, isn’t it… and how do you eat it?

Ha ha. It’s only disgusting when you want to know where it comes from. All the amino acids we’re buying has to come from somewhere…

But as far as gelatin goes, if taken plain with hot water, it’s not tasteful but I had worst. I think the 6 tbsp of coconut oil I’m taking everyday are more disgusting. I was taking virgin coconut oil. I switch to extra virgin and it’s a little better. (That’s to replace the energy I’m not getting from carbs, considering I eat less than 10 gr of carbs a day)

But the best way to eat gelatin is to use it to thicken a beef stew or to put it in a soups.
1TBSP of dry gelatin = roughly 10 gr.

I filled a silicon muffin mold with 6 holes with some water (3/4 level), poured the water into a pan, made it almost boil, put 6 tbsp of gelatin into it, dissolved it with a whisk, then poured the liquid into the muffin molds. I let it cool, put into the fridge and ended up with 6 thick tablets of gelatin, 10 gr each. So when I heat up a soup in the microwave, I just put one on top and when the soup is hot, mix the whole thing et voila !

Thanks for the reply yes i think I’ll order some of that hydrolyzed collagen on Black Friday to try out, worth a shot at least.

Except we don’t all get the same food reaction. I can have tomato sauce, but will get anxiety from a peanut or some rice.

You can’t have tomato sauce.

And some people have not developed any food allergies.

Do you think that you’ve developed a food allergy or that it’s the enzyme inhibiting nature of those foods and their potency that’s the problem?

I know that one poster here suffered a crash after eating peanuts and avoids all nuts now as a result.

I don’t eat tomatoes as a general rule, but I do have tomato sauce sometimes.

Thanks for the reply yes i think I’ll order some of that hydrolyzed collagen on Black Friday to try out, worth a shot at least.

I’ve just done this myself. MyProtein’s U.K. site is offering 40% off in a Black Friday deal already, although postage puts that back up a bit. There are some reviews that claim positive effects on skin, although they won’t be dealing with the same issues that we are.

Do they have the one you’re looking for? Is it this you’ve ordered, @Scotsman?

“That’s why we’ve changed Hydrolysed Collagen Peptide to Collagen Protein - but don’t worry, we’ve definitely not changed the taste or the nutritionals, so it’s still your favourite…”