I read a lot in this forum about prostatitis / hard flaccid and pelvic floor symptoms (collectively referred to as CPPS).
I have realized again the days that despite many supplements / medicines (currently on cabergoline) it is unchanged, it is still exactly as it was two years ago when it all started:
Sometimes I still have a wrinkled, hanging scrotum with a shiny skin. I add a picture here so everyone knows what I mean. There is also a penile curvature and a thick vein on the top that was not there before.

Pelvic floor dysfunction, prostatitis, neuromuscular damage?
For me, there are only two theories, neuromuscular or DHT insensitivity (because my levels of DHT are even slightly elevated), because DHT is a major contributor to muscle relaxation. Anyhow, my prostate examinations all come back normal.
I had an interesting discussion with a guy here from this forum on Reddit, which I do not want to withhold from you:

“I think trazodone, much like finalseride, accutane, jelqing, SSRIs, ect created anxiety / nocebo which is more likely the ultimate source of the issue.
It just doesn’t seem possible that a drug with limited reported side effects can fuck you up so long after.”

“The founder of the PSSD forum (ghost)” literally posted on the hard flaccid forum recently saying he thinks PSSD was pelvic floor dysfunction all along.
I have 3 years and like each one on propecia help. If you were prescribed SSRIs at all you’re already in the long tail of anxiety. "

“Believe me I thought pelvic But the head of the pelvis, which is the definitive text on the pelvic floor and written by the best experts there are (stanford guys, way better than the shitty Italian guy studying PFS) blew my mind. It is deeply troubled by central depression and anxiety.
I do not think Trazadone and Finasteride have literally did anything, I think they have destabilizing mental effects they do for many people (Finasteride has been associated with neurotic behavior when administered to and inhibit important anxiolytic neurosteroids) and in a certain population of men are predisposed these manifestations in chronic pelvic floor issues. It makes it super easy to treat like no doctors know about the floor, especially for men and there’s a lot of scary shit online that makes it easy to freak out and think you’re fucked, which greatly worsens the emotional issues that caused this in the first place.
The pelvic floor issues are not cones, so it’s your bulbospongiosus and icshio get tense in the way your whole body does it (which cortisol DOES hormonally effect) and they are not under conscious control can just stay that way for a long time
Learning to relax again is important. I’m like a child of wired up but tired as a result.”

And now googling this bulbospongiosus muscle … 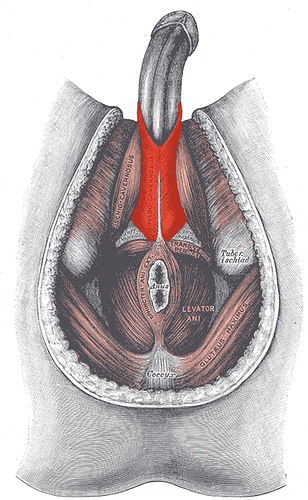 Bulbospongiosus-Male370×600 112 KB
It’s EXACTLY the place where in at the root of the penis have the feeling of loose core (like rubber) and hardened tissue.
Sometimes it’s solid, then it’s soft again. Ejaculation can sometimes improve or worsen it.
I made reverse kegels like a madman last year, it did absolutely nothing. I even pushed a Therawand in the ass … It’s going to be crazy.

Well, I would not go so far and say that we are all just depressive with pelvic floor dysfunction. For what has the pelvic floor to do with anhedonia, braininfog, no reaction to alcohol etc?
It can only be a part of the puzzle.
What do you think? Has anyone experienced these symptoms and got them away?
I think if I could get my pelvic floor structure under control, I would be 75% cured.

I always had hanging scrotum. It has nothing to do with our symptoms… Not sure that we have any muscle problems downthere. How would you describe numb nipples? Sorry if I didnt get you but I think nothing is wrong with pur pelvic nerves, muscles or anatomy of penis. There is no physical damage, just wrong or luck of signals firing from the brain.

I have the same symptoms on pelvic floor, i believe that the only solution is hard gym mode and maybe a profesional steroidal cycle and postcycle. Exercising large muscle masses of the legs forces to develop all other muscles. I feel my pelvic floor atrophied, but recoverable with hard work. What do you think?

When I had a prostate massage in urology, I realized that erectile dysfunction was gone for a while. The solid feeling of the penis came back. But it lasted only a few hours.

Pelvic floor dysfunction has been one of my big noticeable symptoms since using finasteride. I have been getting pelvic floor therapy for close to 6 months now. I have had very good improvements in my pelvic floor in regard to having less tension/ muscle tightness and less tenderness/pain in those muscles.

I have also had some minor improvements in getting nocturnal erections. I seem to get nocturnal erections somewhat regularly in the period of time after physcial therapy appointments and then they get less regular as more time passes. I’m hoping this continues to improve with more therapy.

I think I have had a general improvement in my physical ability to get an erection and maintain it in certain positions. My erections are still not as strong as they once were, but I have improved from being nearly completely impotent to being able to get probably 80% quality erections when seated and on my back. I can also get an erection while standing up now although it is of much weaker quality usually- maybe 60%. If I start with an erection from sitting or laying and then stand up I can keep it for a short period of time now compared to not at all before.

I have not had any significant changes in sensation/ feeling/ ability to be aroused physically or visually or ability to get spontaneous erections yet. I am not sure, but I feel I may have had a slight change in penile sensation after my last appointment. It has had a lack of sensation and pleasurable feeling since finasteride, but also usually a cold sensation and a numbness that always seems to be noticeable and like a background noise to me. After the last appointment, I felt as if that numb background noise sensation went away for about 5 days. No improvement in sensation or pleasurable feeling, but it felt more “normal” in the sense that I wasn’t always aware of its numbness/lack of sensation. It felt like my penis was “there”, just lacking its high sensitivity and pleasurable ability if that makes any sense…

I would recommend pelvic floor therapy to anyone that is having pelvic floor dysfunction symptoms. It does not seem to be a complete fix for all the PFS symptoms yet and definitely not a quick fix, but it has helped me improve in many aspects.

So it hasn’t helped orgasm feeling or anything? That’s one of my biggest problems is that when I ejaculate I can feel a tightness in my perineum or butt area and there’s not that pleasure feeling as once before. It’s like the muscles are working normally but not transmitting any feeling

I still have feeling of orgasm, I never lost that. I have loss of sensitivity in the penis and loss of pleasurable feeling besides orgasm- like during sex.

For me it has. I never had such hanging balls like that before. I writed also that I don’t believe in a pelvic muscle problem only, but they are an essential symptom.

I was in a gym and it make it worse. Maybe I did the wrong exercises.
I think too much stretching/presse the area around my prostate.
Which steroid therapy you want try? My DHT is good…

Unfortunately, the physiotherapy for the pelvic floor has only relieved my pain down there by 90%, but it was only temporary.
Curiously, Psylocibin was the ONLY thing that could permanently release my tension down there.
However, it also has not done anything for libido, erections and numbness …
What could this mean? Some say they have been cured by psylocibin. Unfortunately, my system is so confused that I hardly react to it: /

Can i ask when did this ‘‘curvature’’ of your penis happened? Is it happened abruptly (like day and night change) or slowly in time?

I too have kinda similar problem. Also im experience duller orgasms, it can also related to pelvic floor issues. But muscles need hormones to function in the end right? Its still hormonal i think. @Trazohell

It came weeks after withdraw.

Holy cow man. This is exactly me, exactly. Wow. I created an account just to support that you’re super on to something. I really want to figure out how to treat this, because it would really go a long ways towards improving my overall well being.

Finasteride undid the work that puberty did in our body, so I think we need something temporary to reverse that deficiency.

We have discussed this topic for many years in the following thread… "prostate symptoms" are really pelvic floor/perinium ???

I’ve personally tried to treat is through multiple modalities with the most recent once being trigger point therapy.

My conclusion is that its a symptoms of the underlying cause of PFS. However, I have found that certain relaxation techniques do help to a certain extent.

Holy cow man. This is exactly me, exactly. Wow. I created an account just to support that you’re super on to something. I really want to figure out how to treat this, because it would really go a long ways towards improving my overall well being.

If only I knew. Sometimes I think it’s a permanent nerve damage, then I think again it’s just muscle. But it would not explain other symptoms. I think only optimal mental and hormonal status in conjunction with intensive pelvic floor therapy can bring one out of this misery.

Which relax techniques you did, any videos?

Just something I’ve noticed that I thought I’d share. I’m one of the people around here that has no to very little pleasure or feeling during ejaculation. This is the only symptom that has never improved for me over 7 years. Obviously not a fix at all but I noticed that if I am on my knees and have my legs spread far apart during orgasm then I feel a little bit of pleasure. Not in the penis but a feeling in the perineum area. Definite extra proof that the area is fucked up. Just thought I’d share and if someone else wants to try that has this problem. It’s obvious not 100% feeling but I’d say it takes it from 0-10% to like 40 for me

My flaccid hourglass penis increases when i get hemorroids. It just feels like something is constantly blocks the muscles to properly relax or work.

Have any of you tried the DCT stuff from the hardflaccidmyrecovery.com guy?