Let guys here know that eating this daily has brought very noticeable improvement in PFS symptoms…Its cheap, safe and worth a try if you want…I have no idea why but after spending thousands, trying all forms of hormone replacement I find it very helpful…More energy and overall better feeling even mentally but did not do anything for the actual physical changes to my body and weight which I believe are due to variations in alleles they determine the effects you get…

What dose are you taking. I took close to 20g a few times prepping for a boxing match lately.

Here is the brand I am using and where to buy…

You’re taking a teaspoon or a tablespoon? In water or just as powder? Thanks for posting by the way.

How long until you noticed effects? And when you say a spoonful, do you mean a tablespoon? Teaspoon?

Sorry holyhead…
Have you got sexual sides and taking soda helps you for these?..
Thank you!

Half a teaspoon is recommended here and not for prolonged use: 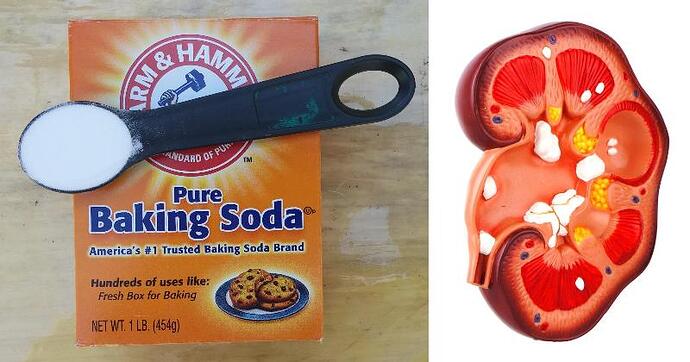 Eat 1/2 Teaspoon of Baking Soda Daily and THIS Happens to Your Kidneys! -...

The kidneys are small, only about the size of a fist, but they perform vital functions that play a role in overall health. Each day, the kidneys filter about 120-150 quarts of blood, to produce 1-2 quarts of urine, filtering waste and extra fluid out...

What symptoms does it help with?

How much baking soda are you taking, a tablespoon or a teaspoon? Do you mix it with water? Does it help your sexual sides?

All of you asking as I am getting some relief from this and to why?? Before wasn’t sure but knew it was not just because of ph of blood… According to this it is affecting AR signaling on a molocular level allowing them to use testosreone as well as the entire endocrine system more effectively…

So where does baking soda come in exactly?

Multiple studies have been conducted showing that bicarbonate, a component of plain ol’ baking soda, can act on a molecular level as a switch to boost cyclic adenosine monophosphate (cAMP) production in the body.

But what is cAMP?

In your body’s endocrine system, signaling molecules like cAMP are necessary for the release and/or production of hormones. Testosterone, a reproductive steroid hormone, is produced when the secondary messenger cAMP signals inside of a cell that testosterone is needed. cAMP can be aided in its signaling process by cGMP (cyclic guanosine monophosphate), another nucleotide phosphate that acts in a synergistic manner to amplify the signal [2].

A pH that is too acidic can trigger the release of bicarbonate in your pancreas, which can also create cAMP. cAMP can also cause the release of a protein kinase enzyme that regulates molecular metabolism in androgen receptors. This means that the receptors for testosterone can become more sensitive, and therefore use more of the hormone [3].

Increased testosterone levels can not only increase energy, but also help your body create more muscle mass and also help you get more out of your workout.

Now that you know how cyclic AMP can affect testosterone levels, we can talk about the other benefits of baking soda. Sodium bicarbonate is a weak base, which means that in your body, it can act as a pH buffer to prevent the buildup of acidity. During your training, you might notice an uncomfortable cramping feeling in your muscles.

This is due to lactic acid buildup in your muscle cells. Lactic acid is a byproduct of fermentation in human cells and when built up, can cause a burning strain in your muscles that prevents you from being able to train to your maximum potential. By ingesting alkaline (basic) supplements, you can prolong your training time and avoid getting cut short by excess lactic acid [4].

Because lactic acid is caused by fermentation, its neutralization can trigger normal cellular respiration, therefore increasing oxygen uptake and consequently, boosting performance and training abilities during a high-intensity workout.

Why Baking Soda Instead Of Other Supplements?

As I’ve already pointed out, baking soda is cheap as hell. So you even if you’re not completely sold on the idea of using it as a supplement, it won’t put a huge dent in your wallet to try it out (baking soda averages around $2 per bag).

Baking soda also has its place outside of pre-workout as a testosterone booster.

A great way to help your testosterone levels increase is by detoxifying your liver. The liver functions as the singular most concentrated area in your body for toxin storage, and yes, those toxins include alcohol and sugar. By fasting and removing any toxins through a strict diet, your liver can regain functionality.

Your liver is important for increasing HGH (human growth hormone) utility as well as breaking down estrogen and testosterone-binding molecules. This increases the amount of testosterone available to androgen receptors in your body, and can contribute to growth of muscle mass.

A quick and effective way to detox your liver is by drinking copious amounts of water, and supplementing that with eating baking soda and spirulina algae only. This fasting detox works wonders in a day and can boost your testosterone levels incredibly [6].

Baking soda isn’t just a new trend that has popped up, either.

In tradition Asian medicinal practices, it has been used to reset the body to homeostatic hormone levels. Nitric oxide (NO), a neutral compound responsible for the regulation of function of the adrenal and endocrine systems, can be produced in alkaline environments. Low nitric oxide levels can stress the production of testosterone, and therefore cause thinning and graying of hair, as well as erectile dysfunction.

Using baking soda could have some serious impact on the way you train, and being that it’s barely two dollars a bag, why not give it a shot? It can boost your performance when taken as a pre-workout or along with another supplement like creatine, and can be used to detox your body in order to produce more testosterone.

Interesting - how much do you usually take and how often?

An excellent post. Bravo.
May I suggest the liver flush in order to get the liver detoxed. Several flushes are often needed.

Then gluthatione is the key factor for detoxing. Working in the liver. That’s why I say to test those levels and add reduced go.or the three building aminos for gl.

To test the level of what?

This study suggests 1 teaspoon in 0.5 L of water. It also says that the antiinflammatory effect lasts for four hours. Does it mean that we should drink it every four hours?

We tested the hypothesis that oral NaHCO3 intake stimulates splenic anti-inflammatory pathways. Following oral NaHCO3 loading, macrophage polarization was shifted from predominantly M1 (inflammatory) to M2 (regulatory) phenotypes, and FOXP3+CD4+ T-lymphocytes increased in the spleen, blood, and kidneys of rats. Similar anti-inflammatory changes in macrophage polarization were observed in the blood of human subjects following NaHCO3 ingestion. Surprisingly, we found that gentle manipulation to visualize the spleen at midline during surgical laparotomy (sham splenectomy) was sufficient to abolish the response in rats and resulted in hypertrophy/hyperplasia of the capsular mesothelial cells. Thin collagenous connections lined by mesothelial cells were found to connect to the capsular mesothelium. Mesothelial cells in these connections stained positive for the pan-neuronal marker PGP9.5 and acetylcholine esterase and contained many ultrastructural elements, which visually resembled neuronal structures. Both disruption of the fragile mesothelial connections or transection of the vagal nerves resulted in the loss of capsular mesothelial acetylcholine esterase staining and reduced splenic mass. Our data indicate that oral NaHCO3 activates a splenic anti-inflammatory pathway and provides evidence that the signals that mediate this response are transmitted to the spleen via a novel neuronal-like function of mesothelial cells.

i’m trying to unlock the full study via sci-hub but i can’t. would you try if in your countries work?

Baking soda is a readily available household product composed of sodium bicarbonate. It can be used as a home remedy to treat dyspepsia. If used in excessive amounts, baking soda has the potential to cause a variety of serious metabolic...