A closer look at Neurotransmitters for possible therapeutic benefits 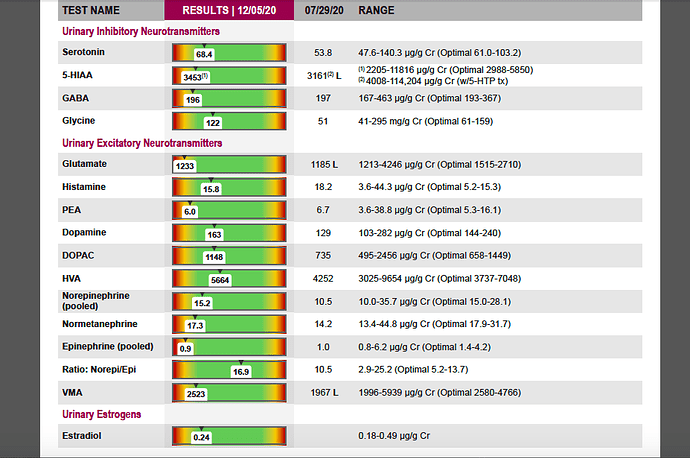 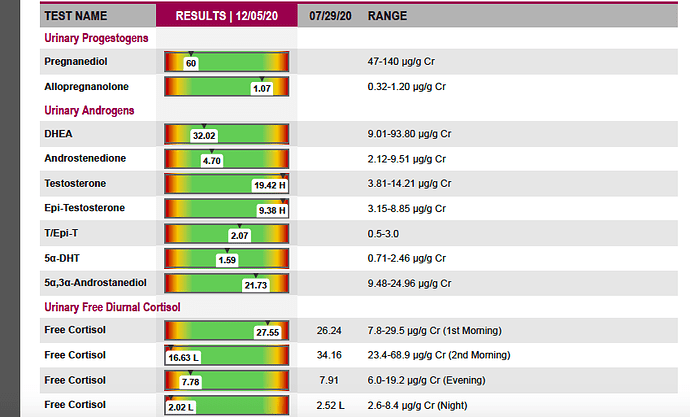 How did you do this test, via a neurologist? Very high testosterone and epi-testosterone in the brain is interesting since that also came back in the pfs study. And i would think that that could explain our symptoms. People taking testosterone and feeling nothing would be logical if it basically cannot can get any higher than it is already is. I always have this feeling in my head, I would call it a sort of cramp. I alwasy think this is maybe some kind of flexing in the brain like what muscles would normally do in other places when you have high testosterone. My muscles would be insanely hard and easy to flex before pfs plus I was really strong. So I believe this feeling in my head is just an never ending flex because of the high testosterone in the brain.

I did this test through ZRT lab. All of these values are urine so it’s showing what the body is excreting of each. This is not necessarily showing what these values are in the CNS but they are still useful. I think that we as a community should have this same test done so that we can start collecting large amounts of data so that we can use to classify different cases. You cannot get this test through a doctor. You need to pay out of pocket for it. But at the end of the day it’s worth it.

Epitestosterone is also the bodies “natural” 5 AR inhibitor. This is a clue. Especially when considering that I have high amounts of DHT in my blood. So it appears my endocrine system is trying to reduce the amount of DHT getting produced by releasing high amounts of Epitestosterone and by binding most of the DHT that’s still getting produced evidenced by low DHT in my saliva. Saliva hormone levels show the amount of free hormone not getting bound before it hits the receptors

Could you please post the study that showed high epitestosterone and testosterone in the CNS of the PFS group. I agree with your point about testosterone or DHT not helping if it’s already high. But in those PFS cases where testosterone and DHT is low it could still help. I think that one of the biggest obstacles in finding effective therapeutic treatments is that there are different cases. This high VS low testosterone point is just one way example of having different cases. Our neurosteriod are probable all different as well. Check out my allopregnenolone. Mine is on the higher end of the normal range while yours could be on the lower end. High end allopregnenolone could mean that my GABAa receptors are down regulated or intolerant. Your testosterone is above range and dht is mid range, Allo is high. Would you say your 5ar enzyme is functioning?
Gaba receptor dysfunction is possible.

Nice post , those are the tests everyone needs to have done.

My blood DHT also tests in at either flagged high or high normal through different testing not posted here. And my saliva DHT also tests in low through different testing not posted here. Saliva hormone testing is believed to show the amount of free DHT not bound by SHBG. In other words the amount of DHT probable making it to the androgen receptors.

Based on the fact that repeated testing through blood and urine show my DHT either normal, high normal or flagged high I’m going to make an educated guess by assuming that my 5AR enzyme activity is allowing for ample testosterone to DHT conversion even though epitestosterone is high. This would mean my “DHT production” is normal if not high. It’s what’s happening after the DHT “floats” around my system attempting to bind to the androgen receptors that does not appear normal in my case. It appears most of it is getting bound so that it can’t bind to the receptors. It also looks like through high urine epitestosterone my endocrine system is attempting to reduce the actual testosterone to DHT conversion as much as possible even though there is still normal to high 5AR activity occurring.

I also agree with you that I think I may be suffering from GABAa receptor disfunction possibly in result of Allopregnenolone rising and staying high after the 5AR inhibitor left my system. I’m also flagged low in saliva preg sulfate which may further implicate the GABAa receptors.

Your right. Everyone here really should have this test done. Most doctors will not order this test because it goes beyond their scope of knowledge and because most insurances most likely won’t cover it. But that’s ok because we can get it through ZRT lab with out a doctors order. We just need to make an investment and pay for it like I did. In the next few days I’ll make a thread asking for help with organizing a massive collection of Data