First off, take any information in this thread with a grain of salt.

The backbone of CDNuts protocol that “some” PFSers seem to improve from is cycling “AndroHard”, multiple cycles for 6-8 weeks. AndroHard is tough to get these days but a new, “better” alternative is available and its called UltraHard.
https://iconicformulations.com/products/ultra-hard

I was reading the following website https://men-elite.com/2020/02/14/post-finasteride-syndrome/ which led me to look for an androsterone product that was “legal” which led me to UltraHard. I then saw a few guys at CDnuts website were testing it as an AndroHard replacement, and it seems they have had great success (I never fully believe anything posted there though).

Anyways, its seems to be consistent with the high dose Proviron trials being ran, but the added benefit being that

You can use the code DELSOL for 25% off the product. The company owner sent me that when I PMed him for a code. In no way do I get a referal bonus or anything like that, just sharing a code he sent me.

I am considering trialing it. But because its a transdermal, I probably won’'t for a while. I have an 8 month old and transdermals are nono with little kids around.

“Androsterone [(3α,5α)-3-hydroxyandrostan-17-one; 5α,3α-A] and its 5β-epimer etiocholanolone [(3α,5β)-3-hydroxyandrostan-17-one; 5β,3α-A)], the major excreted metabolites of testosterone, are neurosteroid positive modulators of GABAA receptors. Such neurosteroids typically show enantioselectivity in which the natural form is more potent than the corresponding unnatural enantiomer. For 5α,3α-A and 5β,3α-A, the unnatural enantiomers are more potent at GABAA receptors than the natural forms.”

Certain endogenous steroid hormone metabolites are positive allosteric modulators of GABAA receptors at low concentrations and directly gate these receptors at higher concentrations (Lambert et al., 2009). As is the case for other agents that enhance inhibitory GABAergic function, such neurosteroids protect against seizures in diverse animal models, and there is emerging evidence that agents of this type are effective in the treatment of seizures and epilepsy in humans (Reddy and Rogawski, 2012; Bialer et al., 2013). The anticonvulsant potency of such steroids is closely correlated with their activity at GABAA receptors (Morrow et al., 1990; Kokate et al., 1994). Although the pregnanes allopregnanolone [(3α,5α)-3-hydroxypregnan-20-one)] and tetrahydrodeoxycorticosterone [(3α,5α)-3,21-dihydroxypregnan-20-one)] were the first endogenous GABAA receptor modulatory neurosteroids to be identified (Paul and Purdy, 1992), it is now recognized that a number of structurally related endogenous steroids have similar actions on GABAA receptors . In particular, the 17-ketosteroid androsterone (5α,3α-A; Fig. 1) potentiatates GABAA receptor responses albeit more weakly than allopregnanolone (Turner et al., 1989; Hawkinson et al., 1994; Anderson et al., 2000), and we demonstrated that it, as well as its 5β-epimer etiocholanolone (5β,3α-A), exhibit anticonvulsant activity in animal seizure models (Kaminski et al., 2005). Anticonvulsant Potencies of the Enantiomers of the Neurosteroids Androsterone and Etiocholanolone Exceed those of the Natural Forms

Has anyone here tried it ?

Very interesting find OP, I’ll research it some more too.

Moments after the application today I got a long stiffy that lasted about 40 minutes.

This stuff is pretty good! Definitely enjoying it.
-MasterMal

I just ordered a second bottle to extend my run on this. It’s pretty impressive. It’s totally taken away my lingering prostate pain and my erection quality is way better. No downsides at all.

So far this shit is just what I was looking for.
-MasterMal

Update coming soon, Rob. Week four has been nothing but alpha vibes thus far!
Ultra Hard is awesome man. I would really suggest trying it. It feels like my first cycle ever (minus the PFS sides I was enduring then, of course), and really amplifies my mood, alpha feeling, and the body results are fantastic. I was in great shape already but my abs are steel on the cycle and I can push through all of my WODs in CrossFit way better than I was doing prior. Had plenty of PRs so far, which is a testament to the ability to add lean strength on it. I drink on it, cheat on diet and don’t really lose the ripped or inshore feeling - everything I wanted out of the cycle as a late summer cycle I’m getting basically. I’m just honestly really glad I found a compound that I can run again…I love the feeling and basically everything I tried after that fourth and final cycle that pushed me out of PFS has made me just feel run down and lethargic. This doesn’t. My only main complaint is that it has made sleep a little worse, I do have some mild insomnia now when I was sleeping the best ever in my life right before running it. Libido is very high, well more than normal, which is different than when running it during PFS, in which it would kill what little libido I had. During PFS, I would have to add 4 Andro to see anything in the libido dept. I would assume this has to be SOMETHING to do with the ARs here…I can’t imagine what, but this just confirms it in my head, at least.

I will say that epi-androsterone gets a bad rap on forums related to PFS for whatever reason. People fail to remember that Cdsnuts ran Andro Hard v3 during his PFS recovery as his DHT prohormone, which contained epiandro, and actually a lot more of it than androsterone. AHv3 was 1000mg Epi-Andro to 200 mg Androsterone. For reference, Ultra Hard is 375 to 125 Epi to Andro. I can’t for sure say how well this would be for PFS/PSSD gents, but I will say that if someone was to ask me what to run now that is on the market, this would be my suggestion 10/10. The ratio of Epi to Andro is very similar to the AHv3 that CD and others that recovered on PH used.
-Maxout777

I just completed a four week cycle of it and currently on pct with their Sustain Ultra and EndoAmp Max. This was my first PH cycle but very happy with the experience - helped to alleviate a few pfs relates issues and will be cycling again for a second round mid-September.
-Zeitgeist

I’m going to try it as soon as I get the product. I bought only 1 bottle.

But I don’t know really how to use it, when you use because of PFS. You’re supposed to rub your balls with it, how much, how long,… you stop and do it after how many days?

Where did you find these testimonials?

I think the whole point is to cycle it

Yeah. I’m asking how to cycle it, how much to take, how long. It’s for PFS so maybe you need to cycle it for a shorter period or the opposite… it’s pure speculation but maybe we can trace a “guide”.
Sorry for my english.

I found those testimonials on 2 websites/forums that are censored so I can’t post them here, but also from the Iconic Formulations webpage.

@Xorack
I don’t believe you put it on your balls, just your chest. 5 pumps per day I believe.

Might buy a bottle looks like I’m never getting the proviron I ordered lol. This looks like it’s worth the try my only worry is how much estrogen with this convert into?

Personally, im taking 75mg of Proviron a day and not feeling a damn thing yet. I doubt this product can help me.

The guys taking it are not getting any extra e2 activity, if anything it seems to slightly lower e2 like Proviron does.

Had a guy PM me back about Ultra Hard…

Hi mate, yes the androhard is working…I didnt feel anything the first cycle but the second took me another 20% further into recovery!..I just ordered two more bottles so I have to keep going.

interested in this, anybody trying it? do you need to do PCT with this? does it shut you down? is it similar to DHEA?

No you don’t have to do a PCT.

You do not need a PCT, but the CDNuts crew that runs it suggest cycling herbs afterwards.

When I run it past scamadviser.com I get this message. 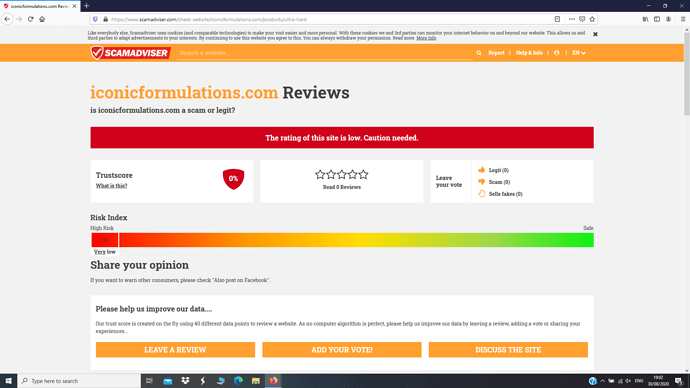 I remember spending hundreds of dollars with high hopes “cycling” pro hormones from the same company over 10 years ago. That one was Dermacrine. Hope it works out better this time, for you guys.

ScamAdvisor says that PropeciaHelp is also a high risk site. Its basically on the level of quackwatch