Someone from the PFS community posted this interesting study in the social net.

I think it’s worth sharing here

The Potential Involvement of Cholinergic System in Finasteride Induced...

Neurosteroids are known to exert diverse functions in the brain. 5α-reductase (5α-R), a rate-limiting enzyme, involved in the biosynthesis of neuroste…

Good find and thanks for sharing

The cool thing is you have actual physicians using the term Post Finasteride Syndrome in public.

“A deeper probe of the current findings holds promise for the development of novel neurosteroid-based therapeutics to treat affective and cognitive disorders.”

Not to say that its fully related. I tested positive for this, so did someone else who took Accutane.
I Still was never able to follow up on this. I suppose I might want to with that last line, but I ain’t dead yet lol.

https://www.mayocliniclabs.com/articles/features/autoimmune/
The ganglionic (alpha 3) acetylcholine receptor (AChR) autoantibody is the most commonly detected marker of autoimmune dysautonomia and is sometimes encountered with isolated GI dysmotility. This is the only autoantibody proven to cause dysautonomia, including GI dysmotility. Importantly, cancer is detected in up to 30% of patients with the alpha-3 AChR autoantibody.

Here are some sections of the study that are really worrisome: 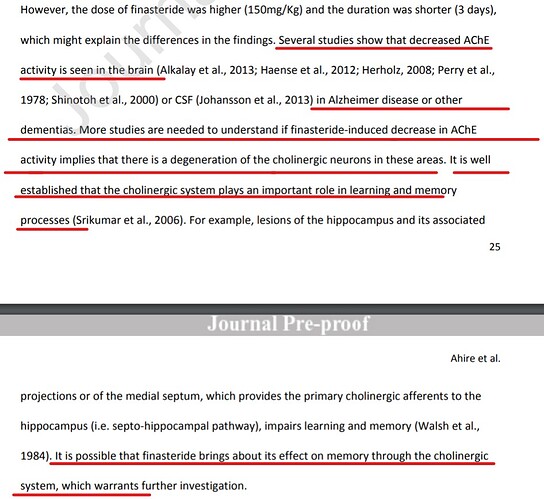 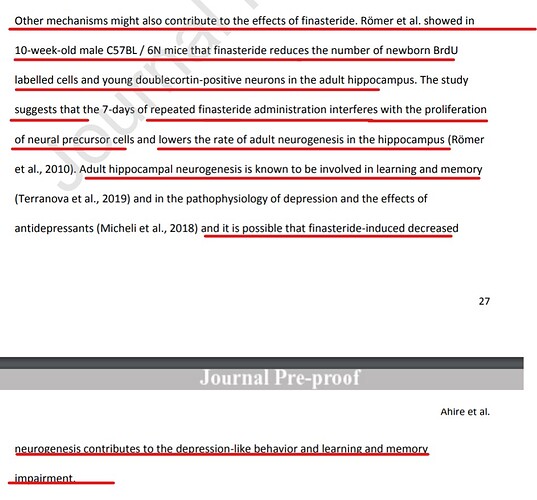 I was always asking myself if we have rather an increased risk for Parkinson’s or Alzheimer’s.

There is a gender difference in the development of Alzheimer’s and Parkinson’s. Men are partially protected by their androgens against Alzheimer’s, therefore men tend to get less Alzheimer’s. Women are partially protected against Parkinson’s by estradiol, therefore they get less Parkinson’s.
Melcangi showed in his study https://doi.org/10.1016/j.jsbmb.2017.04.003, that DHT in the cerebrospinal fluid of PFS guys is low - which would increase the likelihood of Alzheimer’s. But also 17β-estradiol (E2) was low which on the other hand speaks for an increased risk of Parkison’s.

That the cholinergic system is affected according to Ahire et al. (Nov. 2020), is deeply worrisome as low choline esterase levels could be a sign of degeneration of cholinergic neurons - something that happens in Alzheimer’s.

That is all very worrisome. Luckily I haven’t heard of any PFS or PSSD or PAS case who developed dementia after years, but it is something we should track and keep an eye on.

Well! There’s Robin Williams and quite a few of us who feel we have dimentia like symptoms me included. Sorry not intended to make you worry even more but worth a mention

I have dementia and Parkinsonism.

It feels the same here I’ve even got the arm / hand tremor/shake. I saw a neurologist 2 weeks ago and he dismissed my claims. It’s more likely to do with alterations in neurosteroids and the multiple strands of hormonal disfunction. Cholinergic system is also causing cognitive problems in some of us

I am so sorry to hear that.

If you don’t mind I ask you a few more questions?

That would be very helpful thanks!

Is it continuous, every day? For how long?
Did you experience any changes in the speed you walk or do you make smaller steps?
Do you experience muscle stiffness?
Herr are a few tests a friend or family member could try on you if you think the neurologist doesn’t take you serous: https://youtu.be/cac9xS5HCRM

Thanks @Waytocure some symptoms are continuous others are intermittent. My gate has changed from very fast and purposeful to clumsy I often catch the sole of my foot on slightly raised surfaces, same with my shoulders, elbows and back of hands on door frames. I’ll ask a fam member to check it out with me. The Neurologist had made his mind up as soon as I went in the room. Finasteride was mentioned in the referral and my rheum Proff had put on my electronic notes that I was obsessive these killed any credibility.

I also get a clear and noticeable boost from Alpha-GPC, which is sort of an alternative to Citicoline (CDP-Choline), and one of the most effective choline and acetylcholine boosting drugs/nootropics one can get.
However after a little while it has a clearly adverse effect, making me overall more nervous, high-strung and numb sexually and other. I think this is due to it increasing muscarinic receptors, which are acetylcholine receptors, which are also spread throughout the body. Muscarinic receptors seem to be related or similar to 5-HT3 receptors, and both are targets for antiemetic drugs against nausea and vomiting (the sickness and vomiting from alcohol is actually an effect of these receptors).
After I take stuff like panax ginseng, licorice root, (hypothetically ginger, as one can imagine) which count as antiemetics and block or downregulate the 5-ht3 receptors, I feel better. Sulforaphane is also supposed to be very effective, and I’ll try that next. 5-HT3 expression or downregulation also seems to be related to numbness and sensitivity. Although sometimes I get a positive effect from Bacopa which is said to increase the receptors. Maybe because it blocks them first, or who knows (it also stabilizes 5-HT2C).

So is this pro- or against acetylcholine from my side? Well, it’s mostly against those receptors I was talking about, since again, at first I notice a positive effect from Alpha-GPC which quickly gets turned around with increased numbness etc.

Bacopa is derinitely the way to go… Sulforaphane, despite giving a brief shallow boost, results in total numbness. Now I wonder what the regulatory mechanism between muscarinic and 5-HT3 might be, since I definitely can reverse the side-effects from Alpha-GPC’s muscarinic (etc) upregulation with known 5-HT3-antagonists like Ginseng. However filing those receptors down results in total numbness. Maybe Muscarinic receptors do the same thing on their own, but no idea how Muscarinic receptors go back to normal by weaker 5-HT3. Regardless: Bacopa’s upregulation of 5-HT3 is much better than Sulforaphane’s deactivation of the receptors.

Bacopa is derinitely the way to go…

You don’t know what you talking about. It will drop your libido to zero. Plenty of anecdotals on reddit.

I think it’s too early to say whether the 5-HT3 receptor is involved in the development of the disease. Could be. But ADs do so much more than just playing around with the serotonin receptors. Also, we don’t know what the body does when quitting the drug.

Before there is no study done I would be carful with primary conclusions. Hypotheses are good.