Stopped after 7 months of TRT - No withdrawal effects so far

I wanted to give TRT a try. I started around mid December 2020 I think. First with 120mg Enanthate a week eod. Then 140mg. 180mg. And back down to 130mg. I tried eod, e3d and e4d. Through all the time I had no positive effect. As if I do not take testosterone. But I had pretty severe histamine reactions. Wich made me stop it at the end. I could not handle the anxiety anymore that I get from massive histamine.

I had no change in facial or body hair. No hair loss. No gyno. No other sides. Maybe a bit more muscles. My balls were shrinked by a lot.

What I wonder is, I dont have any withdrawal effects. Is that the proof of pfs? Simply as if I never did TRT and now coming off makes no difference. Even if I still have a tiny bit of testosterone left in my body from the last shot, I was shut down for months. So I dont think my own production is back already. While I have to say my balls grew back pretty much already.

So let’s see if the PCT will do something and restart my bodies own production. Because this thread always gave me hope. I have pfs for 16 years. That guy had it 6 years and tried a lot of stuff as well. But he did a full steroid cycle with I guess 300-700mg a week while I did only TRT.

I hope I can get at least back where I was before I tried joekools hcg protocol I started last year I think in August/September for 14 weeks or so. That caused a spike in estrogen I think since my histamine issues got even worse ever since.

Ah btw. these were my levels before TRT and before hcg and before I took anything like dhea and pregnenolone. It was around mid 2019. 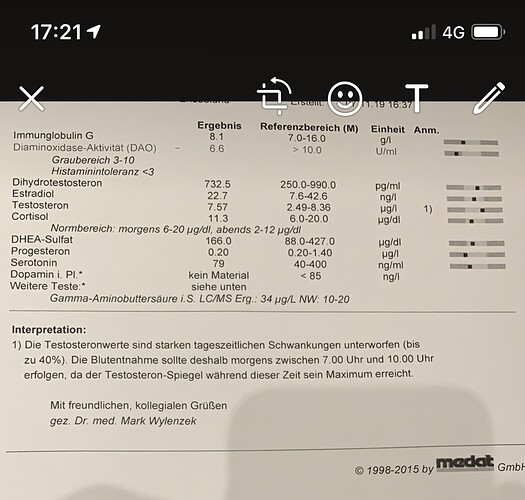 Anybody else have similar experience with TRT?

Edit: Interestingly a week after I was off TRT and took my first hcg shot I had great libido for 3-4 days. But that diminished quickly.

You probably still have test e in your system due to the long half life.

I came off after 8 months and felt no different as well T dropped from 945 to 370 and my symptoms all remained the same.

Your T was already on the top of the range, I am not astonished you don’t see any difference. Did you also check your Free T ? If it was low it should be interesting to try Proviron.
Another thing is your low dopamin, when dopamin is low I believe testosterone is almost unusable. Did you check your prolactin ?

My prolactin is low since I take p5p. My free T was mid range. Here I have bloods during hcg. 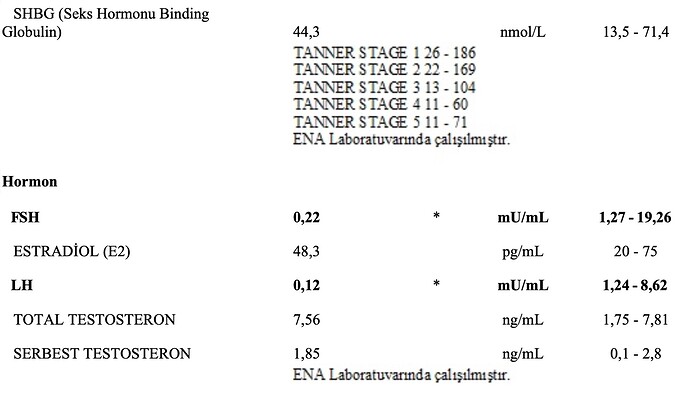 Yes I think my dopamine is one of the main issue since I am very depressed for years, zero motivation etc. Just waiting for my time to be over.

When I took bpc 157 in the end of December 2019 I was fully cured for 4-5 days. Bpc fixes something with dopamine receptors. Unfortunately only temporarily. 5th day I was back to pfs. I tried it many times after but had not the same effect. But at the same time I took pregnenolone and dhea. Maybe they did the trick but not bpc. Whatever it was, I tried all supplements many times and I could not reproduce it.

I have post accutane syndrome for 24 years and when I took these supplements in the end of December 2019 I had oily skin for the first time since I was 16. Not to mention the insane libido. And awesome sleep. And motivation and sense in life. I started waking up early in the morning and do my work. It was like my body got replaced. As I said it lasted only 4-5 days.

Did you do a PCT?

Ok, I am sorry to can’t help you anymore. For your dopamine issue I have no idea. I don’t think Cabergoline is the solution on the long term.
Your blood test seems not too bad (except LH and FSH because of the TRT), may be try to reduce your TSH which is too high. It could give you more motivation…

That low LH and FSH was due to HCG and before TRT. Even on raypeatforum they were suprised that it shut down LH and FSH that much. On the other hand I never checked LH and FSH before so maybe it was too low before hcg as well.

What I wonder is if I take progesterone cream, can I mess up a possible recovery? I feel like progesterone made a big difference back in 2019 since it counteracts estrogen. My histamine issues got better on progesterone I think. Was taking only 5-8mg a day.

Indeed it could be low before.
I can’t help you anymore, my knowledge is limited about the progesterone.
Hope you will find advice. All the best

Ok I have to say, the last 4 days I felt like shit. So pretty much the day I started this thread. Fatigue. Depression. Bad mood. Dick looks like in pfs state sometimes, small and cold head, even though we have 40+ degrees celsius here. Libido is in another world. Brain fog. Suicidal thoughts. I usually feel like this when having very high histamine.

2 days ago I started 10mg nolvadex before going to sleep. It gives me such bad histamine reactions. I feel like I want to get out of my skin. Hopefully it’s only at the beginning. Histamine issues are caused by high estrogen but nolvadex should Block estrogen. So how does this lead to more histamine…

I will use this thread to post my progress. Hopefully on the end of the road recovery waits. I wish at least my state back I had before I started hcg last year.

PFS is different from hypogonadism. TRT has no benefit or effect on people with PFS except very likely desensitizing their receptors even more, shrinking the balls, raising blood pressure, shutting down HPTA and production of a large number of other hormones, increasing anxiety, costing a lot of time and money, and potentially permanently reducing ability to produce T naturally or have children in the future.

I tried it extensively and don’t believe I have ever felt any different whether my T levels were 300 or 1000+.

If you do a search, people have been trying and failing with TRT here for 15 years. PFS isn’t hypogonadism, so it isn’t surprising that a medical treatment for hypogonadism doesn’t fix PFS.

In every discussion of TRT, fellow poster vkg1 will assert his opinion that hypogonadism and PFS are not the same. He’s correct, they aren’t…but they aren’t mutually exclusive, either.

I had hypogonadism and used TRT for five years before I used finasteride for BPH. Almost immediately, I went from a normal life with daily sex. Instead, I haven’t had an erection for two years now even though I continued my TRT. Read my profile, I’ve had all the symptoms of PFS. I’ve experimented with both taking high doses of testosterone and going without, and neither changed my situation.

In conclusion, I assert that you can be hypogonadal and still get PFS. I’m living proof. Jim

But I had these days before TRT as well. I would not count it on TRT achievement.

I think I have these recoveries when inflammation in the body is reduced and dopamine is up. Because these days ı feel confident and outgoing as well.

Yes of course people with other medical conditions can additionally get PFS. Just because you have a cold or AIDs or anything else doesn’t mean you can’t also get PFS.

Vkg1 I think you’re wrong in your assumption that hypogonadism and PFS are two completely different things without any association.

PFS seems to cause a central(brain) disturbance which leads to a form of hypogonadism in a subset of us. A large part of PFS sufferers seem to have low-normal testosteron levels for their age. We can temporarily correct the hormonal situation but it won’t heal the central brain disturbances so it seems. At least not in the short term (weeks).

For my own records when reading this later in my life, it’s been 6 days on nolvadex. Every 2nd day I get a migraine wich I can stop with ibuprofen. For me a clear sign of too much histamine. So I guess too much estrogen.

Other than that I dont feel different than usual. Hard wood all night (wich I always had even before any hormones). Balls seem still not 100% back. They feel like at 50% while on TRT it was 30% of size.

One thing I noticed from trt. Before any attempt to treat my pfs (started to treat it in December 2019 first time) I had watery semen. Now since I started TRT it comes out thick, white and in parts while before it was white but like water. I can shoot my load maybe 20cm wide. That did not change. Sorry for the details lol.

My hardest boners I had in January/February of 2020. It were only a few days but my dick was as hard as in puberty. Like a rock. I could feel the hardness down to my prostate. tgat time I was taking dhea, pregnenolone and progesterone, ashwaghanda and some supplements. I stopped em all. Usually I can get him maybe 80% hard at max (without Viagra etc.). Could be of course my age since I am 40 now while I was 24 when I got pfs.

Even though many things recovered, my libido never did. But then again I cant tell if that’s my nature. I also took accutane with 16 years so that might have killed my libido already. I only remember that before accutane I had a libido that was on a dangerous level. I could fap 10 times a day and still go on. While after accutane I had not much sexual desire already but it was still there until I took Proscar.

Man stop screwing around with your endocrine system. Taking tamoxifen without blood tests is insane. You are going to mess yourself up almost 100% guaranteed. Popping pills without knowing what you are doing is not “doing something about PFS”, it’s repeating the same mistake that got you in trouble in the first place. It will not end well. Tamoxifen is not a joke. You can’t just take it and hope for the best. Even if you take it with blood tests you can get things wrong. There is basically zero percent chance that you will not make yourself worse taking tamoxifen without blood tests. When I see things like this a begin to think this community has done more harm than good because it has indirectly facilitated people doing crazy shit like this.

His TSH is 100% fine, it would be insane for him to take thyroid hormone because you gave him the idea that his TSH is “too high”.