In 2011, depression was added to the product labeling of finasteride in the USA. The US Food and Drug Administration’s Adverse Event Reporting System database contains at least 36 death cases for finasteride. The aim of this study is to characterize the clinical histories and symptoms reported by a series of 6 suicide victims who took finasteride for treatment of androgenic alopecia.

Medical records and autopsy reports were provided by family members of the cases. Relevant information was extracted according to guidelines for submitting adverse event reports.

An important pattern of symptoms was common among all cases who committed suicide in the setting of finasteride use - insomnia and persistent sexual dysfunction after medication discontinuation. Insomnia and fatigue/tiredness were some of the most debilitating symptoms. Apart from 1 case who had hyperlipidemia, there was no documentation of concomitant medication use with finasteride or any baseline medical or psychiatric diagnoses prior to starting finasteride. The findings of this postmarketing series may not be generalizable to the population of men who committed suicide in the setting of finasteride use due to small sample size and bias. Associations between medication use and symptoms cannot prove causality.

Men under the age of 40 who use finasteride for alopecia are at risk for suicide if they develop persistent sexual adverse effects and insomnia. Further research is needed to establish whether finasteride has a causal relationship to suicide.

As always, I applaud you on the speed of posting these finds @Sibelio. Sadly suicide has impacted our community. It is very important for the public, scientists, and doctors to know this and what leads young men to take their own lives after developing Post Finasteride Syndrome.

Thanks for posting, good to see this out.

I am particularly pleased to see Irwig note the essential impossibility of repeated and ultimately pointless calls for placebo controlled study as a useful endeavour due to the huge numbers and time-frames needed given the significant rarity of PFS:

Although a well-designed randomized controlled trial could potentially establish causation, such a trial would probably require over 10,000 subjects in each arm to be adequately powered and would need to last for at least 5 years. It is very unlikely that such a trial would ever be funded or completed.

I recently completed an early draft of a literature review in which I briefly commented on this important point:

Some authors continue to call for repeated placebo controlled trials to determine the existence of persistent effects from finasteride, considering little else to be sufficient (Basaria et al., 2016; Gray & Semla, 2019; Diviccaro et al., 2019). Further study of this kind will not be enlightening nor practically useful to the scientific community, the PFS patient or consumer in the medium term, if ever. It is urgently necessary to acknowledge both the novel nature of the condition and the rarity of the syndrome (Traish 2018) for a pragmatic approach. It is possible that even a large-scale randomized trial would not reach signal. Rarity, however, cannot and should not be construed to justify dismissal of the gravity of this condition (Maksym et al., 2019). This is particularly relevant with consideration to the unpredictability and dose-independence of PFS, and its atypical presentation following withdrawal. Dismissal of retrospective studies is often attempted owing to a perceived lack of credibility in normal instances of ADR. This disease is not a normal ADR, to the point that existing drug reaction algorithms are unable to accommodate it (Healy et al., 2017).

A pragmatic approach to any progress must take the reality of this issue into account, not defer to an arbitrary standard of perceived evidential quality appropriate to a more ordinary adverse drug reaction while patients continue to be driven to suicide by profound and unresolvable suffering. Insistence on the application of a formula that is notedly not fit for purpose in this circumstance manifests as a dereliction of duty. This will be at the expense of lives that could be saved by the most basic of warnings. It is astonishing to consider that mechanistic elucidation may now plausibly precede acknowledgement of a syndrome well reported by patients for two decades. Patients cannot continue to shoulder this global problem in lieu of clinicians.

Thanks for posting this. I’m pleased to see Dr. Irwig is still investigating PFS.

“…An important pattern of symptoms was common among all cases who committed suicide in the setting of finasteride use - insomnia and persistent sexual dysfunction after medication discontinuation. …”

Well, that describes nearly everyone here, myself included. 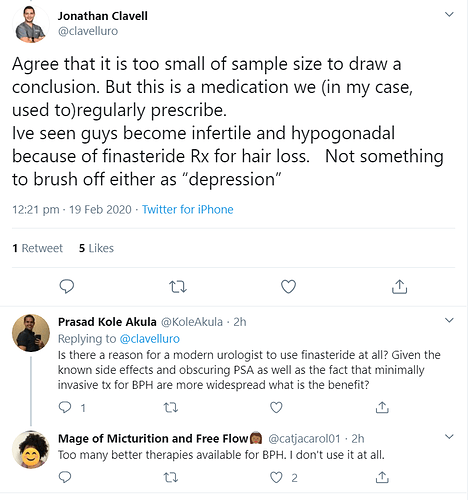 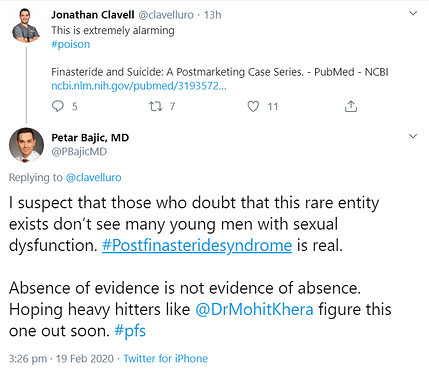 Tbh, I kind of understand some of the comments that dismiss this. Doctors aren’t less superficial than the rest of us. The drug is approved, many people use it without issue, superficially it does not seem like this drug could cause suicide. So, confirmation bias kicks in, and you can easily dismiss this with the “small sample size” argument. It may be worth to step in and present some of the other literature. Some of these people may come around when faced with more evidence.

Looking at those replies. When patients express clearly their doctors do not properly clinically record their situation, how could the numbers game they are hoping to play ever be useful? We know from the patients themselves and their families that these cases are incompletely recorded, so we cant get statistical power that way. The disease is too rare, and our last suicide - amongst many others - was not clinically recorded.

As Prof Irwig mentioned in his paper, a disease of this rarity reaching signal in a placebo controlled trial would require a trial of a scale and duration that could never be achieved. A rarity in predisposition in line with a well-recognised genetic andrologic disease - say above one in 350,000 - wouldn’t make three cases in a million consumers. We know PFS is more frequent than that, but it is still extremely rare.

Therefore, when the clinical experience of our patients is to generally be entirely dismissed (180 surveyed reveals extreme dissatisfaction denoting a dangerous situation per Short Assessment of Patient Satisfaction), what on earth are we meant to do? Die quietly while a few urologists declare the numbers not very strong, carefully mentioning only the symptoms that aren’t undeniably physiological? It is absolutely risible in 2020. I truly wonder how they would feel if it were them, or their child, suffering this horrendous disease and they saw such indifference. Anyone outside of this sorry situation would hope such professionals to be there to protect and help young people who had their lives snatched away by clinical ignorance.

For those wondering why we bang on about numbers in the survey, here’s the reason. We need as strong data as we can get, especially given the inherent biases of purposive non-random sampling.

I should say however despite the disappointment of the usual handwaving, it’s very clear the situation is entirely different from how it was. There are some clinicians there with a clear awareness, concern, and even first hand experience. Very heartening.

Absolutely, @Northern_Star. I’m always shaking my head at the vitriol I see on here from some patients towards youtubers who are saying PFS isn’t real or something, when so many of our own fellow patients dont understand the extent of symptoms in others and dismiss them in their wild theories etc. The situation is ostensibly implausible, and the true extent of it even moreso. People just default to what “makes sense” to them, because in many cases Occam’s razor applies. Not this one unfortunately.

As an aside, it’s amusing to see one of two tweet’s on Dr Khera’s accounts be some spam to free ray ban glasses…Hopefully not a sign…

I think I may jump into this conversation later on as a test to see how these doctors react to us.

Thought this was a pretty ignorant comment by Erika