Does anyone have this "indent" (most visible semi-flaccid)

Hey guys. I was just wondering if anybody has had an indent on the base like in this picture attached. It’s most prominent when semi-hard. Did anyone get cured from it? 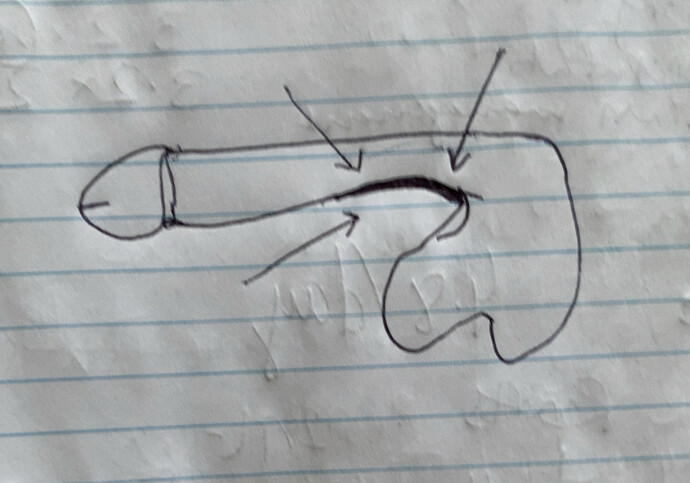 Yes I have this, it feels like it dissolved in that area such a nightmare.

My two cents: It’s just the result of an incomplete erection.

I think most people who have sexual/erectile dysfunction are familiar with this to some degree. As long as we don’t know what exactly goes wrong in PFS we can’t truly say anything definitive about what causes this.

I don’t think it is due to any sort of tissue loss personally. I don’t think it’s permanent, in the sense that if you could somehow get pre-PFS libido and the brain and pudendal nerve all work correctly this probably doesn’t happen.

Have you reported this to your doctor? This is something that they may be able to offer some sort of explanation and or recommendation for treatment.

I would lean towards Wintermoon’s explanation. I had some very strange curved erections during my worst period, but when I’m feeling better, I don’t notice anything like that.

I also have this issue and draw the exact thing few years ago.

But it is there while even flaccid. I took an alpha blocker yesterday to test my theory. Alpha blockers give back my full flaccid warm penis.

And sadly, it is still there! Its not that visible but i can feel it when i touch! What is the cause of this!? It should not be 7/24 persistent if this is just a bloodflow issue.

I did and he even did a doppler. Everything was clear. I was shocked. He felt this area too. Its mainly how this area feels kind of weakened too. Idk how to describe it. Most prominent when semi-hard and feels like as if this caused the penile weight to lessen idk.

What did he say about this when he felt the dent?

He said its normal nothing out of the ordinary.

Now, kinda good news, in Prostatitis forums i asked few people and they reported they have this too!

Remember these guys never took Fin or other drugs.
But a guy said he has this from “time to time.” And not seems persistent on them. I gotta ask more.

My dent is always there. Sometimes almost gone but when i push and examine those area with my fingers i can feel the “hard” and “squeezed” tissue there.

Yes sort of. But u just forgot how it felt become so idk if its my mind or what.

I can feel it right on my urethra. The biggest tube like vein under the penis.

It feels like that tube is squeezed there. Not on the exact base of the penis, but a few milimeters above it. Just like you draw.

Now i will do an experiment with my bathmate and see if it goes away after pump on flaccid. See if it is a bloodflow issue.

PS: Back from the lab, lol. So, it seems that after pumping, that dent seems to be disappear.

Although my penis was very curvy, pointing downwards, the curve existed on the whole penis. So it is a one continuing curve, line without the particular dent on one area.

Due to extra blood, your penis can’t hang fully downwards after pumping i guess. So it stays curved like the letter ‘‘C’’. I hope you can visualize what i mean.

And when i checked out the dent part on the curve i couldn’t feel it, maybe it is inside there and got masked by the blood… I don’t know. But few minutes after pumping, now the dent is came back.

One more thing i realized, the dent is actually comes from that Hourglass Flaccid shape. So the hourglass squeeze appears on the middle of the penis on people and especially when on semi hard. But when your penis is on flaccid state and shrinks, the area is actually the exact plase where our ‘‘base’’ indent is.

Also when im sitting, and when my penis gets very soft, it disappears completely… But i think we still shouldn’t have that on semi erect state. It looks very wrong.

So it is all connected it seems. This is scary… I knew i had this but almost forgot its existence. It will resolve once we heal though, im sure. @blackkey1996

Please ask your doc why this happens, what is the relation if you will go soon. I will ask too.

@Ozeph @Hbcap Any of you had this indent? A guy on peyronies forums said this to me: Cooper, if you have a dent on your penis it is related to a scar on your penis. It has nothing to do with pelvic or prostate issues. It is a scared tunica.

Also, just for the record, there is no muscle in the penis.

What you guys think? Did it heal on you Ozeph? I also have some scar tissue on erect penis… God what a nightmare this is.

Did it heal on you Ozeph

I had all sexual symptoms (and an odd one I never heard anyone mentioning) but aside from my balls hurting 24/7 and seemingly shrinking, I didn’t get any change to the morphology of my genitals.

So I didn’t have that symptom.

I did get on a strict diet 6 weeks after crashing and after that sexual symptoms ceased to increase and eventually gradually disappeared. I think I avoided the worst. It must have taken a little over a year for my balls to stop hurting. I still think they lost some volume but it’s not so obvious (I actually made a plaster molded copy of my balls 18 years ago.) I’d say they lost less than 10% volume.

So I didn’t have that symptom.

Considering how connected everything is in the human body, PFS still amazes me.

made a plaster molded copy of my balls 18 years ago.) I’d say they lost less than 10% volume.

Aha! That’s a smart thing to do. I did get a testicle ultrasound recently so i think i dont need it. The testis volume should be written down there.

So, correct me if im wrong please, you had PFS, your testis and scrotum shrank.

And then you recovered and your “testicle” size is just %10 less than before PFS? Is it the testis or scrotum or both we are talking about here? Did your testis size also heal?

Lack of blodflow also shrinks the scrotum. Makes it look “empty” and dry. Thats why it sags like an old man in PFS people.

And then you recovered and your “testicle” size is just %10 less than before PFS? Is it the testis or scrotum or both we are talking about here? Did your testis size also heal?

Lack of blodflow also shrinks the scrotum. Makes it look “empty” and dry. Thats why it sags like an old man in PFS people.

I cannot confirm they shrank. It appeared so to me and yes, I do remember my scrotum hanging very low and thinking that was odd. At one point I was pretty sure my balls had shrank, but before writing the post above, I took a look and I’m not sure anymore. So maybe they did and came back, maybe I just imagined they shrank. But they did look pretty small within that low hanging scrotum… Gee wtf this disease !

One think for sure, it felt like someone kicked me in the balls 24/7 at first, and decreasingly afterward, for a duration of about 15 months.

That’s over a year and a half ago. I’m really happy this pain is gone. Thinking it over, I shouldn’t complain I still have insomnia. I went through so much and most is behind now. What a shit load of pain this thing !

We’re a bunch of guys testing the diet with some assorted tricks to see if it has the same benefits for others. If it does, I’m thinking of opening a non-profit diet center in a cheap country somewhere. I’ll make it as free or cheap as possible, with higher prices for those who want organic, bio food instead of the cheap stuff (which I’m currently taking… Lol !)

Those dents are likely fibrosis/scar, such as in Peyronie. They can be localized in the tunica or in the septum.
If they are in the septum, they are more difficult to locate by physical examination.
What you need is an ultrasound or an elastography to measure the fibrosis and see if there is any calcification.
By lowering DHT, Finasteride weakens the penis protection against small traumatisms, so the penis gets scars and it expands less well.
Don’t waste your time with metaphysical theories and visit your urologist ASAP to see what the best course of action may be.
Take into account that you have a window of opportunity of several months to treat this with different methods.
Otherwise, the scar becomes chronic and much more difficult to treat.

Thank you for your response. I did get a doppler done which showed nothing. And now i am planning on going to get a color doppler done. If that shows all clear i am going to go ahead and get that elastography done. Do you think there is even a slight chance this could go back to normal?

There is always a chance.

Sadly in the US this procedure is not conducted. What a bummer.

I think its more of an vascular issue more than a tissue damage. I remember JoeKool said to me he had semi erect hourglass issue, imagine that! And it did disappear after HCG. If it was a scar tissue, it couldn’t go away… @Ifoundacure reported also he had this, ‘‘one side of penis can’t get the blood issue.’’ Sounds even heavier than a regular peyronies… And it did heal for him too after Trestolone.

However the ones we have on erect penis migh actually be the scar tissues due to weak bloodflow.

I have a little scar tissue where my flaccid hourglass happens on my erect penis, like a small hardness and peyronies, i hope it will go away once i fix the disease.

God, this disease is more than a nightmare. People gets suicidal when they develop peyronies or prostatitis alone, however, we have all of them together on top of hormonal problems. Its like the worst package of disease developed for a men. Are we too strong mentally after going through all of this? It feels like a dream still. Too bad to be true…

Thanks @Cooper, it’s also a possibility.
I guess both problems may be present (tissues + vascular issues).
For vascular issues, my impression is that there is a high adrenergic tone in that hourglass area (vessels contract too much). Which is coherent with Melcangi’s recent finding (there is too much noradrenaline).
One hypothesis could be: