The DASS is a 42-item self report instrument designed to measure the three related negative emotional states of depression, anxiety and tension/stress. The scores may be interpreted with help of the following table: 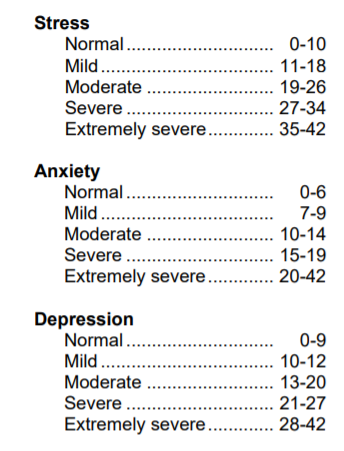 Like with the IIEF results, there is a clear and significant worsening across all domains for the main drugs covered (AD, Fin, Iso) after quitting the drug.

It is interesting to note that the antidepressant users already had a significant increase in depression while on the drug. This is not exactly what antidepressants are supposed to do. This data will hopefully raise some eyebrows in the medical community.

In any case, users from all three drug classes ended up with “Severe” depression after quitting their respective drugs, regardless of the pre-drug depression level. Finasteride and Isotretinoin users had normal scores on all domains before taking these drugs. Even AD users only had “moderate” depression before taking their respective drugs. So much to the nonsense that some in the medical community are trying to push, namely that PFS/PAS users probably had a previous history of depression. This is simply not true, even though the pre-drug depression level clearly makes no difference for the outcome.

Finally, the following table shows the DASS score of patients which had received a diagnosis of depression vs. those respondents which had not received one.

You get prescribed something. You think it will make problems go away. It makes them worse or makes new problems.

That graph really is a picture worth a thousand words.

Finasteride and Isotretinoin users had normal scores on all domains before taking these drugs.

The isotretinoin manufacturers claim that their acne patients are depressed because they have acne. Not because isotretinoin causes it. But look at the stats here. Normal scores before taking the drug. The depression starts after taking isotretinoin.

But look at the stats here

I hope, eventually, some more isotretinoin folks will take the survey. 28 responses just isn’t that powerful (at least for the skeptics). But sure, the results are pretty clear otherwise.