What do you think we are? Pretty bumbling. I’ve lurked here for 8 years, I’ve seen the random miraculous healings and members who speak closer to scientists than scientists likely do. No one has a single true answer as to what causes this - and I’d hoped for 8 years that someone would figure out something, even if it was just mass hysteria! Instead I’ve lost jobs, lost my wife, tried to kill myself. No one here is closer to an answer - but like everyone here so desperate for a cure that like pal I tried every medication under the sun, and if I could get my hands on legit Bayer Proviron to take 200mg a day for 7 weeks I would. Goddamn illegal in the US or something. The point is we’re all bumbling and I hope and pray that there is some goddamn karmic justice for those Merck snakes who KNEW about the side effects but considered all of us expendable for the sake of making more goddamn money! I truly hope something we find leads to a cure - Proviron, Masteron, St Johns Wort, Tribulus, a flower that grows on the tallest mountain ridge in the world - anything before it’s too late.

Some might think I’m splitting hairs, but IMO steroid abusers are on different level of bumbling than us. Everything else I completely agree with.

If this community had spent the last 15 years promoting research instead of googling herbs then we’d be cured by now. That’s OUR fault.

Doubt that. But anyway, can you make a different thread. This is about proviron and OP’s recovery.

I have histamine intolerance and found this post very interesting. Looks like the body needs creatine. And I remember reading some mentions about Accutane recoveries with methylation protocols.

Now some guys here mentioned creatine might work as similar as proviron. It increases the conversion of Testosterone to DHT. And many people here mentioned they crashed on creatine.

@MOONCHILD did pretty much the same Pal did. But with creatine. Unfortunately he stopped posting in that thread. I think he was on to something. Same theory as Pal. Force the body to a reset or whatever. He felt worse first. And than better.

Would there be dangers or risks in loading up on Creatine for a few weeks? That I can try if the risks seem reversible. I would have tried proviron again, if it were easier to get in the quantities needed, but can definitely get good quality Creatine (on Amazon?) and give it a go if anyone has a recommended brand.

Do your research. Here are couple stories where people crashed with creatine.

I have tried creatine. Before pfs it was awesome. Extreme hairloss and muscle hardness, felt like i am on steroids. After pfs it has no hormonal action in my body. It gives me some muscle hardness if i exercise with it but i feel like my body’s own creatine production has been depleted. Creatine is not good for pfs people, atleast for those who has receptor problems. Better to take it from meat sources instead of supplements.

I appreciate the advice. I will say that I’ve had PFS for at least 12 years, and didn’t know what it was for many years. I had taken creatine in the past, for many months, in attempts to “improve things” well before I knew about these forums. Because my memory has become progressively worse, I don’t remember how it made me feel, I do recall during that time I was eating absolutely clean and going to yoga several times a week. I was also very slender and 20 pounds lighter.

I’m now 51 years old and time is rapidly running out for me, so I’m considering all options. I’ve recently taken a series of blood tests (from 2 separate doctors) and will also ask them about creatine and get retested while I’m on it.

For what it’s worth, my creatine blood levels were normal and are below. What the relationship is between blood creatine levels and supplements, I don’t know. It seems safer than proviron (with a big emphasis on “seems”). I’m hoping it gives the same expected results as proviron hopes to give. 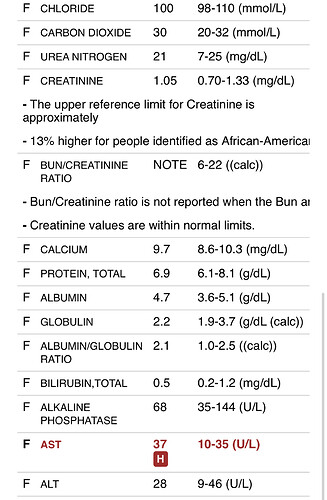 People have been trying taking creatine here for 15 years. Every thread here turns into the same things that have never worked. It’s completely insane.

creatine for me has the same results the breathing air.

I don’t disagree, but like many others, I have to do something other than sit back, watch life pass me by, and wait for merck to undue what they caused.

It may accomplish nothing, but like Thomas Edison, at least we’ll know what didn’t work.

Merck or anyone else will never help us because they have no incentive. We need to get organized, unified with the other groups, and make research happen ourselves. Killing time by dicking around with the same crap that hasn’t worked also kills us. It’s as if people think a fairy is on the way and once she arrives we’ll be cured, so we just need to bide our time eating herbs and playing video games. That’s wrong, there isn’t any fairy. There’s just us and what we accomplish.

We need to do the opposite of what we’ve done the last 15 years. A cure hasn’t even begun to arrive, precisely because WE have been sitting doing nothing.

Vkg1, I don’t disagree with you that we need to do those things. I’m ready to help. Maybe we can start with a quick survey or other data points that take a minute, and some way to collect data like lab tests from each of us over time.

Of course, I’m open to other things that will move us forward.

Why is no one here making different threads for doing this pal protocol? Every group should do different doses of 8 weeks proviron. Some will do 25mg, some may do 50mg, some may do 100mg and the risk takers may do 200mg. Something like grp A, B, C, D. The grp which has maximum success should be considered. I don’t think everyone here needs 200mg.

Agreed. But to do that properly, we’d have to have controls, and test somewhat similar finasteride victims, source the same genuine proviron, and ideally, run complete labs before, during and after. We’d also have to eat somewhat similarly, and avoid other substances.

I’m in for the higher dose, assuming we can source proviron in the US without getting into legal trouble.

I have tired Proviron, at 25-50 mg per day, for a couple of weeks, until my 4 boxes ran out, while I did feel better on it, I also started exercising at the same time. I didn’t get more because I noticed my feet were swelling, and wasn’t sure if it was related. In hindsight, it may not have been. Given Proviron isn’t allowed in the US, If I had further issues, I’d have a difficult time explaining it to my doctor.

Having said that, if there is a legal equivalent to Proviron, I’d be ok with higher doses for 7 weeks,