Celebs another one to watch

I believe he’s also on Propecia. I had the fat face for a few years. Click on the pic.

On a separate I was speaking to an old guy the other day (part of my 1 day volunteering role) and he told me he lost his wife 3 years ago has been suicidal the last 2 and very withdrawn. You guessed it he’s been on fin the last 3 for prostate problems. He was astounded when I spilled my knowledge he said he knew it wasn’t because of the loss of his wife but no one believed him. I didn’t share my situation though. How many are there out there!!!

“There were signs of Clonazepam, a benzodiazepine used to prevent seizures and treat panic attacks, and the antidepressant Trazodone.”

For any UK guys, my thoughts are that possibly Eamonn Holmes could also have PFS.
for the last few years his health has deteriorated madly, He is or should I say was in the public eye nearly everyday presenting on telle, I’m sure he would’ve wanted to keep his locks and photos of him over the last 15 years shows he was receding when he previously had a full head of hair.

I’m not in the UK and I don’t know this guy but chronic debilitating back pain gets the same shoulder-shrug from doctors as PFS and is way more widespread. I also suffer from chronic back pain that didn’t destroy my life but was bad enough that I wasted a year seeking treatment from every possible angle and came away with absolutely nothing. The pic of him with the crutches shows a symmetric face full of fat and collagen, doesn’t look like PFS to me.

I agree and the majority get nailed mentally, he doesn’t display anything like that.

I don’t think they would go public. More likely they would call the Foundation to see if they could help and then Phil will just go on a tangent about the horrors of PFS, how he wants to write a book about it and while he is not a scientist, it will likely take billions to figure this out. If any celebrity or very wealthy person gets hit and wants to help financially, please God, allow them to find Mitch/PFS Network.

I’ve spoke to Phil a few times and he does seem to try to persuade sufferers to go public. I see your experience was different.
I find him to be a good guy.

The Australian cricket legend was found in his villa

I wondered the same thing. Did he ever stop doing the ads? Hard to believe anyone here would take the money knowing the danger. Assuming Warne A) had pfs and B) realised.

I’d like to think he was one of those that never made the connection. I expect the numbers in that group are huge. I was getting palpitations, dizzy spells, racing heart beat years before I knew.

Ultimately it will come down to these people speaking for themselves and speaking up, otherwise it will be of little value.

Even presence of finasteride from an autopsy is not going to say anything ultimately about their motivation to end their lives and will not rule out anything else.

The only two scenarios that will have any value for our patient community are when they have loved ones who are convinced finasteride made a significant contribution to the situation, or they specifically write suicide notes that contain explicit mention of finasteride as a significant reason to end their lives.

I just don’t see how it would be anything more than speculation otherwise.

It will always be speculation when the public including celebs aren’t made aware of what harm fin can actually do and pfs is generally not accepted. Symptoms can appear while on the drug even after years of starting, miss a few doses while waiting for a new script and something changes, see the Dr no answers, Identifying fin would be remote and a stroke of luck. This happened to me many times just one of many scenarios of how easy this is to miss. But we need one of them to be in deep, make the connection step forward then boom. I believe it will happen and soon, there are a few out there who have been on it for years and are clearly showing signs. Getting to them would be helpful.

Shane Warne also appeared to go the full plastic surgery route from a very early age. It could be that he was both vain and insecure, ending up looking very much like he’s had work done, and the (much) worse for it, although you could also take the line that it was part of a spiral where he was trying to redress the effects of a certain drug. As above posts state, all speculation, but not entirely to be dismissed.

But we need one of them to be in deep, make the connection step forward then boom.

Boom what, what would that do

In my humble it would break the seal on this a celeb hit bad that wouldn’t let it go. The news channels would love it and sufferers would lose the stigma cloak. Others who haven’t made the connection would get the light bulb. There would be an influx, we’d get air time. Things would change. All wishful thinking I know. Better to hope!!!
As a minimum it would deter some

Warnie had one of the most unhealthy lifestyles for the vast majority of his life. He was famous for having one of the worst diets on tour - he used to request nothing but baked beans and Hawaiian pizzas - he drank like a fish, smoked like a chimney, abused drugs, the works. He did this for decades. 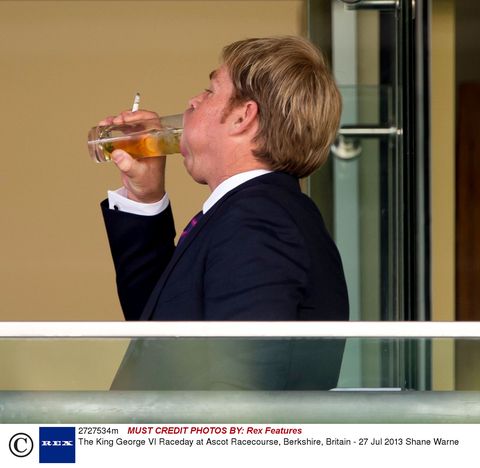 He was smoking as recently as this year: https://www.dailymail.co.uk/tvshowbiz/article-10370491/Shirtless-Shane-Warne-puffs-cigarette-sips-energy-drink-hotel-balcony-Sydney.html

I listened to him in commentary for years during the Australian summer and he was completely coherent, normal, and exactly the way he was when he played. If he had PFS, he was an extremely mild case.

Highly unlikely his death had anything to do with finasteride.

I just realized one of my favorite streamers, who sadly took his life two years ago, probably had PFS. His name was Byron Bernstein but he was more known as “Reckful”. Most people who have played World of Warcraft or been visiting Twitch would have known him. He was really famous, both due to his skill and also his streams.

I never thought about it until today, he was balding but he used to be a very charismatic guy. He’s talked about having some mental problems all his life but there a sudden change a couple of years ago and now when I looked it up it appears he started finsteride in 2015-16 or so (decreased in 2020).

Here’s a clip where he tells a girl he has no feeling in his dick at all. Sounds oddly familiar. He also developed gyno apparently.

Also it seems he connected the finasteride to his mood changes and quit, but apparently it didn’t fix the issues. When I think back on the streams he did the year before his passing I recognize many traits in myself post PFS.

Now I’m not saying 100% he had PFS, because who can know. But I do find it quite likely after all. When I got the news that he passed away I actually shed some tears, he was truly a great guy.