Bad Reaction to Dutasteride, Trying to Find Myself Again

Where are you from (country)?
USA

What specific drug did you use (finasteride, dutasteride, saw palmetto, isotretinoin/Accutane, fluoxetine, sertraline, citalopram, leuprorelin, etc…)?
Finasteride for a year and then 2 doses of Dutasteride

What dose did you take (eg. 1 mg/day, 1 mg every other day etc.)?
Finasteride 1mg (Hims generic) and two doses of Dutasteride .5mg (generic)

What condition was being treated with the drug?
Androgenic Alopecia

For how long did you take the drug (weeks/months/years)?
Finasteride for a year, Dutasteride one week (two doses)

How old were you, and WHEN (date) did you start the drug?
Age 24, started Finasteride in April 2018 and stopped a year later followed by two doses of Dutasteride

How did you quit (cold turkey or taper off)?
Cold turkey

How long into your usage did you notice the onset of side effects?
No Finasteride side effects, reacted to Dutasteride within a few hours of consumption that subsided for a couple of weeks and then returned

Other (please explain)
Symptoms above and below.

What (if any) treatments have you undertaken to recover from your side effects since discontinuation of the drug?
Ketamine infusions (40 minute treatment and 20 minute recovery)

Hi all. My name is Joe. I’m 25 years old and started taking Finasteride (via online subscription with Hims) back in April of 2018 to combat my receding hairline. I did pretty much fine on it and noticed very little different about myself. I suppose looking back now, the only thing I could say maybe I had a rare few moments of feeling like something bad was happening, even though nothing actually was. But it passed as quickly as it came. It only occurred during the first 6 months and was hardly anything that concerned me. I had suffered from debilitating social anxiety and generalized anxiety for years and had gotten a good grip on coping with feeling mentally bad. Anyways, I had some regrowth along the hairline and was glad to see that happening. But my self-consciousness was bad and I went too far with it.

After a year of being on Finasteride, I had finally gotten health insurance and got into a doctor after years of not being able to see one. I told him what I was taking (just the Finasteride 1mg once daily and 500mg GABA supplement twice daily), why I was taking it, and what I wanted. I told him that I’m not seeing the results I had hoped for and had tried multiple things over the years to get my hairline back. I asked about Dutasteride and he praised the medication as great stuff that works well while also adding that his brother takes it too. He had no problem prescribing it to me within minutes and went about his day.

I immediately went and had it filled at the pharmacy, went home, and took a dose. A few hours later, I was on the floor in agony curled into a ball and begging to be taken to the hospital. My heart was pounding, my head felt so intense, my chest was tight, my mouth went dry, and my insides burned. After a few hours of those symptoms, everything went back to normal and I was able to go to sleep at 4:00am. I waited a few days and thought that things seemed normal, so maybe I should try one more dose and see if it was just a fluke. It has been the worst decision of my life. The same symptoms happened again within the same timeframe and lasting the same amount of time. Things went back to normal for the time being (2 weeks) and I never touched it again. But then I started getting symptoms again, even though I didn’t take anymore.

Since then, things have been a gradual decline. Over the course of the past 3 months, I’ve been to the ER multiple times, hospitalized twice, seen my new primary care doctor multiple times, and have seen multiple specialists. My symptoms have been bizarre. When it all started after stopping at the second dose, my libido was fine for weeks, everything down there functioned fine, and I had no muscle issues. However, I had the most god awful panic attacks that came out of nowhere as well as vertigo, sensitivity to outside light, dizziness, nausea, and this unexplainable intensity in my head that caused major restlessness.

Weeks later, my libido has decreased, I have some difficulty getting erections, I’ve experienced horrible restlessness, lightheadedness, bad depression (I’ve never had depression before in my life), my muscles have gotten weak, my memory has declined, my cognitive functioning is awful often, my enjoyment in my normal daily activities has diminished, I have this weird feeling on my upper torso and back that feels sunburnt often and worse when the depression happens, sensitivity to cold, I’ve had intrusive thoughts of suicide and a desire to die, I get random flushing, my acne has been awful, I’ve been constipated, my heart rate is higher and harder than it used to be, my vision is blurry, my appetite is gone, my thirst is gone, I get physically cold now like my body can’t warm itself, my insides are in chronic discomfort, my ears ring constantly, sounds of any kind are very sensitive, I have insomnia to the point where I cannot sleep without prescription sleep aids anymore, and I can only sleep 5-6 hours now.

My life has been miserable lately and I feel like a prisoner in my body. I have seen so many doctors who can’t seem to figure it out. They all agree something is going on because my lab results have been all over the place with fluctuating immune system levels, positive ANA, ANA titer ratio of 1:640, and Epstein Barr (mono). I’ve already had mono before, so I found it weird that I got it again but it’s cleared my system as of writing.

Nothing has been the same though since taking Dutasteride. I can barely function each day or enjoy any aspect of my life because everything is so different now and it’s hard to move around. I’m going to try an amino acid complex (including L-Histidine) soon, as recommended in another post. I pray to god it helps. Wish me luck and, if you pray, please pray for me. Thank you!

EDIT 2: Not much has changed symptom-wise. I started TRT 4 weeks ago and Only very slightly helped some minor symptoms but didn’t make a dent in whatever happened to the brain. Doctor is checking DHT to see if it’s still crashed or has come back. If low, we’ll be adding anabolic DHT to the protocol I’m on, which is Cypionate 150mg and HCG 1500iu once weekly. Positive thing is that I didn’t react bad to the treatment so far, I suppose. Hope you all had a good holiday season and hope 2020 is better for all of us.

I’m so sorry to hear of your experience. It is one so many of us here are familiar with.

My advice in the immediate term would be to cease taking most of the supplements you listed, particularly the zinc and vitamin D. Certain supplements and anti depressants are anti androgenic, which is the common factor which we believe is causing this syndrome. Lexapro is best avoided as it is an SSRI, which are believed to be causing this syndrome too.

Please also give this thread a read

What Can I Do? An Action Guide For New Members Community Projects

Hello, If you are a new member suffering from PFS or an existing member wondering what steps you can personally take to get involved, help advance the issue and make your voice heard, please read the following guide. Propeciahelp has been instrumental in initiating and supporting much of the work to achieve acknowledgement of and research into PFS. Staff and contributors from our patient community work determinedly to increase awareness and initiate more research into the underlying molecular …

Please stay strong @Joe and look after yourself as best you can during this period. The first 6-12 months are usually regarded as the most difficult for those with this condition.

Understood. Thank you so much for the kind reply, warm welcome, and information.

Hey Joe, I agree. If I were you I would stop all supplements / drugs. Fast for a day then go an elimination diet like carnivore for a couple of weeks…

I appreciate your reply! Unfortunately, some of these medications aren’t ones you can cold turkey from and would make my situation worse. However, I have been gradually tapering one by one and am at a level that’s considered very low doses, minus the Ambien. The insomnia is so severe that, before having it, I was up for nearly two weeks straight and delirious. I had tried natural sleep teas, melatonin, supplements, etc. and none of it worked. I would love to not be on anything, as was the case for many years, minus taking the Finasteride and, later, the two doses of Dutasteride. Eventually, I’ll get there though. 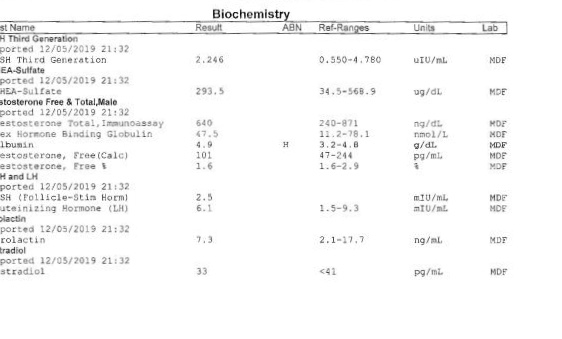 They started me on Cypionate 150mg and HCG 1500iu once weekly. It helped some of the minor symptoms but has not fixed the major issue of whatever that medication did to the brain, as I still feel like I got transported into a different realm of reality, like what you would experience on a bad drug high. Nothing feels real. I’m also still pretty emotionally flat, have very little libido, bad memory, poor concentration, reduced reflexes/agility, weak, fatigued, can’t sleep, no appetite, sweat a lot, get flushed in the face daily, hair shed, blurry vision sometimes, slight ringing ears sometimes, nerve sensitivity in the genitals, rapid and hard heart rate, low production of blood, horrible anxiousness, and burning in many parts of my body.

Urologist is testing my DHT and Cortisol next as well as rechecking my T and E levels to see where they are. If DHT is crashed, we’ll be adding anabolic DHT to the protocol. I’ll update as soon as I can if/when there’s anything to report. Thanks everyone.

Hi @Joe, thank you for checking in and updating us. I’m sorry to read things haven’t changed much for you. You’re probably aware of this but it’s worth stating that many of our members over the years have tried to remediate this condition using conventional endocrinological therapies. Few have reported much success with it and some have worsened their condition pursuing that path.

Could you take our Patient Survey? The data generated will help to characterize the condition(s) that have come to be known as PFS, PAS and PSSD, along with several other persistent syndromes resulting from various substances.

Can’t seem to access it. It says it’s an invalid URL.

Can you try that again (perhaps on a different machine?)