Very interesting article, claims ED is not due to androgen deficiency/receptors or mutated genes?

Like it says in the title, i just found what I believe is a very interesting article which compared PFS users with asymptomatic fin users and it claims the following:

"Serum DHT levels, testosterone to DHT ratios, and circulating markers of tissue testosterone metabolism through the SRD5A pathway, 5-androstane-3, 17-diol-glucuronide, and 5-androstane-3, 3-diol-glucuronide levels, and the ratio of ADT-G to ETIO-G, were similar among groups, providing no evidence of persistent inhibition of peripheral SRD5A activity by prior finasteride use. The nucleotide sequences of the AR, SRD5A1, and SRD5A2 genes did not reveal any explanatory variation in the coding regions or splice sites or in CAG repeat length in men with persistent symptoms.

Furthermore, the peripheral markers of androgen action (hair growth, acne, and sebum production, hematocrit, PSA levels, lean body mass, and the expression levels of nuclear AR and -catenin proteins, and other androgen-regulated mRNA transcripts in the skin) did not differ among groups.

Thus, persistent sexual symptoms in men who had previously used finasteride, are unlikely to be due to androgen deficiency, variations in the coding regions of the AR, SRD5A1, or SRD5A2 genes,
persistent peripheral inhibition of SRD5A1 and SRD5A2 genes, or to persistent off-target inhibitory effects of finasteride on peripheral androgen action"

"The clinical implications of these findings are that symptomatic finasteride users are unlikely to benefit from treatment with testosterone, DHT, or any other androgen, because these patients do not have evidence of androgen deficiency, persistent SRD5A inhibition, or androgen insensitivity"

Here is the link to article, hope someone can understand it better than me: 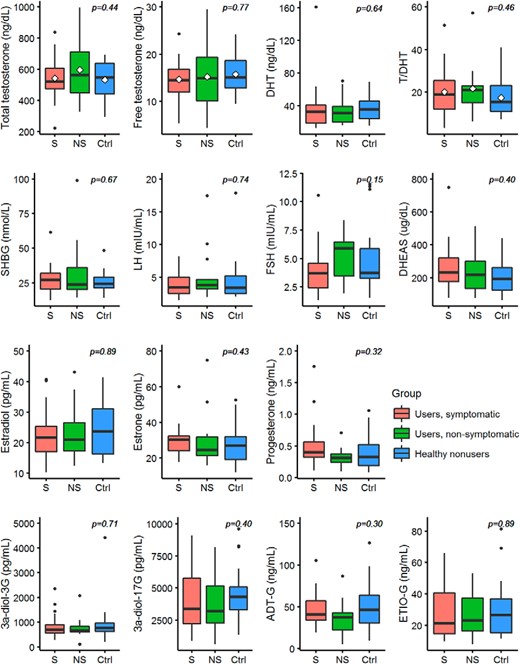 Characteristics of Men Who Report Persistent Sexual Symptoms After...

Context:. Some men who use finasteride for hair loss report persistent sexual and other symptoms after discontinuing finasteride therapy.Objective:. To determin

From my understanding it’s brain AR/5AR that matters, peripheral and tissue AR are probably useless indicators in our situation.

but AR signaling was lost which regulates other gene expressions

and depending on individuals we all have different genes affected

thats what the italian study and baylor showed i think, please correct me if im wrong

This has already been addressed at length, and at the time, but I noticed your join date was only late last year so I’ll provide a brief explanation.

It would be like taking a biopsy of someone’s toe who has lung cancer - just completely irrelevant. A complete waste of a study and John Santmann even wrote a letter to the journal expressing his frustration at the study design.

Also, what Baylor found, and what has long been the hypothesis of Axo, Awor and others, is that AR is overexpressed, not silenced. If you have the time, I suggest reading their literature review here: https://www.propeciahelp.com/post-androgen-deprivation-syndrome-abstract/