This is pretty interesting right here. This could go in both directions.
One side, 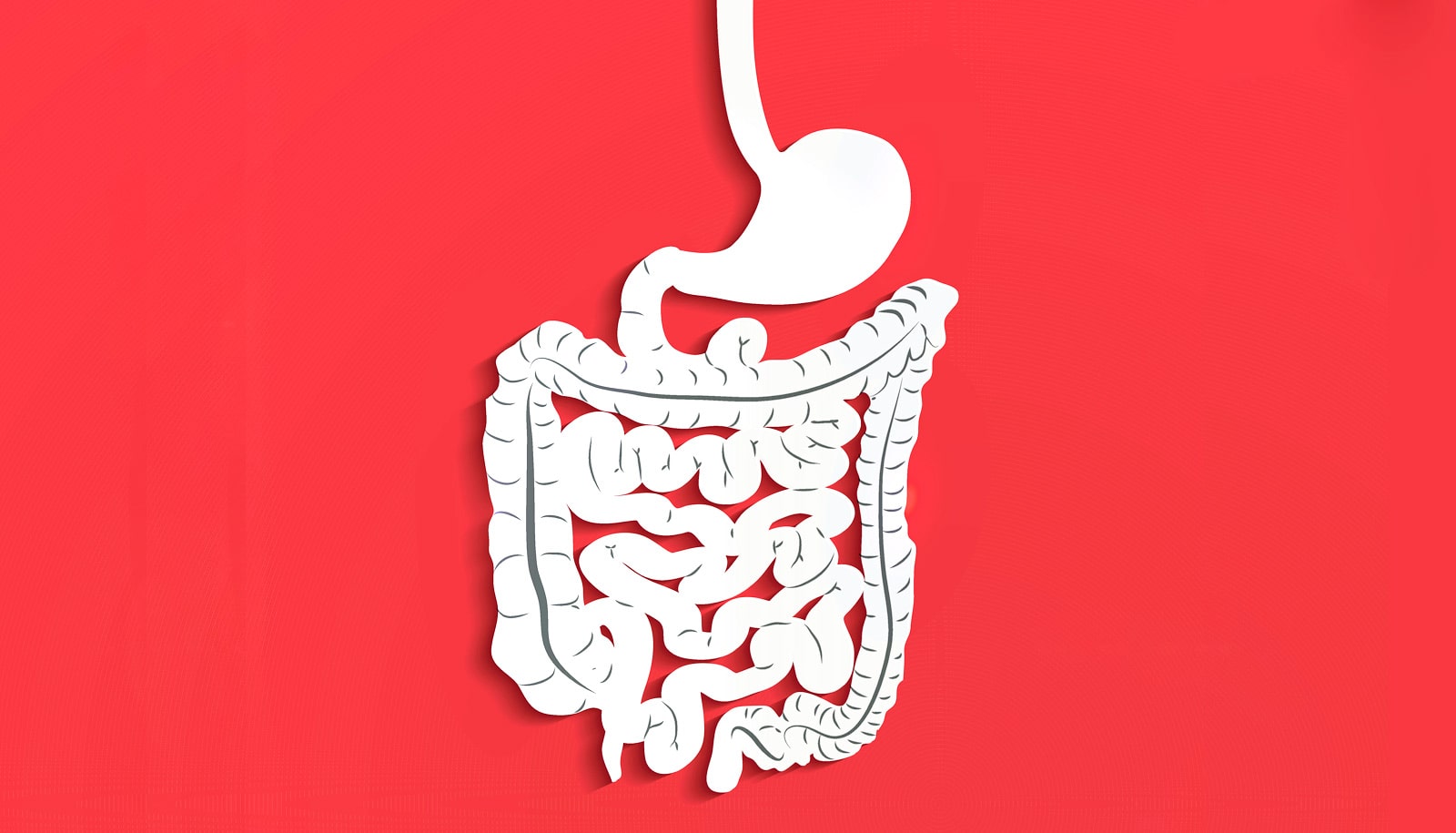 New research in mice clarifies how bacteria in the gut interact with the immune system. Vitamin A is a key factor.

To play their part in regulating their hosts’ immune systems, the bacteria in the microbiome fine-tune the levels of a protein responsible for the conversion of vitamin A to its active form in their hosts’ gastrointestinal tract, the researchers found.

Vaishnava’s team found that Firmicutes bacteria, particularly members of the class Clostridia, reduce the expression of a protein within the cells that line the intestines. The protein, retinol dehydrogenase 7 (Rdh7) converts dietary vitamin A to its active form, retinoic acid, Vaishnava says. The Clostridia bacteria, common to both mice and people, also promote increased vitamin A storage in the liver, the team found.

They will also explore the impacts of increased vitamin A storage in the liver due to bacteria Rdh7 regulation.

The other side,
# Downregulation of Th17 Cells in the Small Intestine by Disruption of Gut Flora in the Absence of Retinoic Acid

Downregulation of Th17 Cells in the Small Intestine by Disruption of Gut...

Retinoic acid (RA), a well-known vitamin A metabolite, mediates inhibition of the IL-6-driven induction of proinflammatory Th17 cells and promotes anti-inflammatory regulatory T cell generation in the presence of TGF-β, which is mainly regulated by...

Intestinal mucosa has a unique and complicated immune system composed of a variety of cell populations (1, 2). Among these, Th17 cells producing IL-17, IL-21, and IL-22 control immunity, inflammation, and infection at mucosal surfaces (3, 4). The lamina propria (LP) of the small and large intestines at steady state contains large numbers of IL-17–secreting Th17 cells and may thus influence intestinal homeostasis (3). Recent studies demonstrated preferential loss of Th17 cells in the gastrointestinal tract of HIV-infected patients (5, 6). In addition, IL-17 is required for host defense against oral Candida albicans , Staphylococcus aureus , and Citrobacter rodentium infection (7, 8). In the T cell-mediated colitis model, the recipient mice provoke disease by inducing IFN-γ and IL-17 secretion dependent on IL-23 production (9, 10). Other studies have shown that the adoptive transfer of IL-17–deficient cells results in a more aggressive colitis in the CD45RBhigh transfer model, which means that IL-17 plays a protective function in intestinal damages (11).

Yes it seems to be the case, but getting things more normal I have found gets complicated as vitamin A is sold with fish oil which upsets my stomach. Sort of helps but doesn’t due to fish oil.

Maybe a type of bacteria to get it working is possible, there does seem to be less bacteria now, easy weight gain etc…

One thought would be taking Accutane could shut down the natural microbial production of Retinoic acid.
Ive seen through other examples this could be possible. It would be based on harboring certain strains as to how this could affect people differently.
So you could have a scenario where a person is still taking in vitamin a, but its not being converted to retinoic acid, which could have some account for systemic levels.
Just one thought.

Yes on Accutane serum retinol I think studies show it rises in serum, definitely rises in skin, conversion to ra could be possibly blunted initially and after.

Did our bodies just get lazy? Something too consider.

Bodily functions that are mediated by microflora are ridiculously many and the bidirectional relationship between immune system and microbiome is particularly interesting. I’ve reasons to believe I’m low in genus Clostridia so I’m on a specific diet as well as a probiotic to help me with this. It’s way too early to tell but I’m very optimistic.

Just want to add if serum retinol is no longer raised after treatment, this would exclude poor conversion and the body getting lazy.

I guess the question is if lack of ra, where’s the retinol going?

Retinoic Acid and the Gut Microbiota in Alzheimer's Disease: Fighting...

Potentially, it is yet too early to conclude from the few reports on changed microbiota in Alzheimer's disease to a dysfunctional role in retinoid-signaling. However, there are several routes how microbial commensals might affect and might be...

Retinoic acid can influence neuronal functionality by means of plasticity but also by neurogenesis and modulating proteostasis. Impaired retinoid-signaling, therefore, might contribute to the development of diseases in the brain. Despite its rather direct impact, retinoic acid also influences other organ systems such as gut by regulating the residing immune cells but also factors such as permeability or commensal microbiota. These in turn can also interfere with retinoid-metabolism and via the gutbrain- axis furthermore with Alzheimer’s disease pathology within the brain.

Potentially, it is yet too early to conclude from the few reports on changed microbiota in Alzheimer’s disease to a dysfunctional role in retinoid-signaling. However, there are several routes how microbial commensals might affect and might be affected by vitamin A and its derivatives.

To jump around a little bit, there have been thoughts on copper metabolism and neurodegenerative diseases as well.

Induction of Ceruloplasmin Synthesis by Retinoic Acid in Rats: Influence of Dietary Copper and Vitamin A Status

Induction of Ceruloplasmin Synthesis by Retinoic Acid in Rats: Influence of...

Ceruloplasmin, a copper-containing acute phase plasma protein, has been shown to be regulated by 13-cis retinoic acid in rats. Ceruloplasmin activity was significantly increased within 24 h and remained elevated for at least 72 h after a single...


Ceruloplasmin, a copper-containing acute phase plasma protein, has been shown to be regulated by 13-cis retinoic acid in rats.
I know some have wondered about their copper numbers on here. ie, unbound.
Calcified July 1, 2020, 3:30pm #8

Yeah spot on, no vitamin A too much copper, I’ve always had this on my mind, to be honest I thought I may have had Wilson’s long before people started wondering this on acne org forum.

I don’t bother with zinc as it’s not helpful to vitamin A issues due to increased RBP which I suspect, no proof but it makes my scalp worse.

Time to think about the issues that may arise from low normal range ceruloplasmin levels. Mild Wilson’s?

I’ve always questioned some type of vitamin A issue and there is just NO scientific literature to prove this isn’t possible .

a little late reply, but here’s one of the studies. Know of any others?
I wonder if this interference with endogenous vitamin a metabolism could be systemic.

Isotretinoin Treatment of Severe Acne Affects the Endogenous Concentration of...

An investigation of pooled skin samples from 22 acne patients has shown that isotretinoin and its major metabolite, 4-oxo-isotretinoin, can be detected in sebaceous glands during treatment with isotretinoin (1 mg/kg/d for 4 months). The levels are...

Interaction of Isotretinoin With Endogenous Retinoids

^could only get the abstract on this one.

This one is interesting,

This study suggests that supplementation with retinyl palmitate is an effective means to increase circulating all- trans , 9- cis -, and 13- cis -RA concentrations among humans.

^but could this process become broken or have microbial involvement?

I would have liked to seen the conclusion to this as well,

Are Endogenous Retinoids Involved in the Pathogenesis of Acne?

I sort of remember reading a study out there that birth deformities are not due to vitamin A exposure but the act of stopping exposure due to a built up resistance. Something about cyp changes not taking long to go back to normal but a long-term resistance was an issue varied between organs or something, cant find it now.

I may have it wrong but it was something like that I think.

I still take vitamin A but I think I may be building up a tolerance. Will know more soon once tests come in.

I normally dont make any recommendations, but I would be curious about some second opinions on this.
If there was a chance, some could really be behind the eightball with this, or trying to get this going again or colonize.

“In addition to diet influencing microbiome activities, specific microbes can alter the host metabolism of dietary components. For example, vitamin A is metabolized by gut dendritic cells resulting in the secretion of retinoic acid, and retinoic acid is important for modulating mucosal inflammatory and tolerogenic responses. Specific bifidobacterial strains can upregulate expression of the enzyme that converts vitamin A into retinoic acid, thereby maximizing the anti-inflammatory effects of this vitamin [49]”

Possibly the probiotics act like calorie reduction, or stimulate a sort of fasting state, due to bacteria eating food, stimulates the increase in vitamin A.

I still take probiotics, it’s good for my gut, but I still require vitamin A.