Woke up from my insomnia and just found this on /r/HumanMicrobiome/ and only skimmed it. 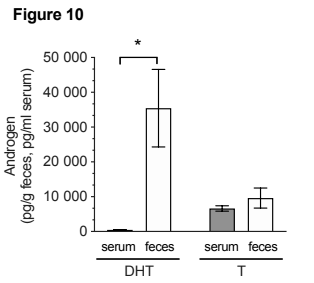 The finding of very high free DHT levels in the distal intestinal content of mice with a normal
GM composition and men was unexpected, and the physiological and pathophysiological
roles of DHT within the distal intestine are mainly unknown. DHT has been reported to
increase smooth muscle contractility in colon, an action dependent on the androgen receptor
(22, 23). Furthermore, androgens can influence intestinal endothelial function (5). It is, thus,
justified to hypothesize that the high levels of DHT, being the most potent androgen, could
have a role in the regulation of the contractility and permeability of the distal intestinal wall.
Our novel finding of high free DHT levels in the distal intestinal content of mice and men
may have implications also for the pathophysiology of intestinal diseases. In humans, the age adjusted incidence of colon cancer is higher in men than in women (1, 18) and a study in rats
has shown that orchidectomy decreases the risk of colonic adenomas, while T treatment of
orchiectomized rats increases this risk (3). In addition, irritable bowel syndrome (IBS) has
been reported to be more common in women than in men (31) and it has been suggested that
androgens protect against IBS (27). Furthermore, male patients with IBS show a different
symptomatology than women, with more men reporting diarrhea, whereas constipation is
more common in females (11, 36). One may speculate that pharmacological or nutritional
treatments affecting the GM composition may change the free DHT levels in the distal
intestine, and thus have an impact on the risk and pathophysiology of intestinal diseases
having a link to androgens, such as colon cancer or IBS.

In conclusion, the findings in the present study demonstrate that the GM in the cecum
deglucuronidates high levels of glucuronidated DHT and T found in the small intestinal
content. This results in remarkably high free levels of the potent androgen DHT in the distal
intestinal content of healthy young mice of both sexes and men. We propose that treatments
with probiotics or changes in the diet affecting the GM composition might modulate intestinal
androgen metabolism and, thereby, affect the risk of androgen-related diseases mainly in the
distal intestine, but potentially also at extra-intestinal locations. Further studies are needed to
evaluate the physiological and pathophysiological roles of the high levels of free DHT in the
distal intestine.

I think something to keep in mind with this is what makes each probiotic unique whether that’s on a species or strain level. There’s only so much to look at right now though as to what’s commercially available and well researched.

Supplementing with probiotics is still mostly uncharted territory that not even researchers of gut microbiota recommend themselves. Not only can the dysequilibrium of the GM induced by finasteride/accutane, etc. use not easily be remedied by haphazard supplementation, we are only pushing it into further chaos of unknown repercussions. I think the overwhelming majority of probiotics out there will harm anyone rather than help.

But whatever, I’ve developed colonic inertia constipation and am desperate to be able to shit once a day again.

Ive posted this before, but I know insomnia seems to be a big issue with some. Im not necessarily looking at diet intervention here, but how our microbes might line up. I really dont have alot to go off of just looking at my results alone. Im not sure if this testing is available outside the US atm.
Actually just checked,
Viome is currently available in Australia, Canada , France, Germany, UK and USA.

Mayo Clinic to Collaborate with Viome on AI-Driven Personalized Nutritional...

Mayo Clinic to Collaborate with Viome on AI-Driven Personalized Nutritional Strategies to Help Understand Sleep and Obesity - read this article along with other careers information, tips and advice on BioSpace

Insomnia is my primary symptom. I am literally disabled by it. This Viome thing is all about giving you nutritional advice based on your poop. 3.3 stars on Amazon reviews. Have you done this?

Yes I have. It took 4 to 6 weeks for results. Ive talked about it a little bit on here. Im not most interested in the dietary advice, more so that this is the only testing available I believe that can detect microbes down to the strain level. This was also suppose to tell how active certain strains are, they took this out for now because its going through some type of certification.

Looking at mine, lets take histamine for example. There’s a lactobacillus reuteri strain found in my stool that may or may not produce histamine.
Another standout is there is no Bifido Longum in my stool, a very common histamine degrading, keystone type bacteria.
I have different conflicting thoughts on this.
Certain bacteria are capable of displacing others.
H pylori for example can be treated with l reuteri. it binds to the h. pylori bacteria to be excreted, so something normally found in the upper gi tract is now showing up in the stool. So if I see bacteria normally residing in the upper gi tract showing up in the stool is this a good thing? idk.

I could reference a study here, an odd result of fecal transplants increasing lactobacillus in the stool. It didnt come from the donor.
https://ashpublications.org/bloodadvances/article/2/22/3097/16106/Fecal-microbiota-transplantation-with-frozen

Maybe a type of immune challenge from the FMT? Idk.

Too exhausted to read anything tonight on such little sleep, but I found this write-up on Viome you might be interested in.

A review of the recent Viome preprint

An open peer review of a preprint paper by Hatch A et al. from Viome, posted on OSF Preprints, January 2019. Full disclosure: I worked for Viome’s competitor uBiome from October 2016 – …

Yeah, thats originally part of the reason I posted that info about the Mayo collaboration, to lend some credibility. Looking at your article, I see its from a now defunct Ubiome ex-employee whos company got into their own legal troubles.
Again im not looking for any dietary insight from this, just the thought of what may or may not be there, how active the microbes are, and if this could relate for some of us, as to what might be in common.
I continue to pay attention to companies like Viome, to make sure there’s some legitimacy there along with some possible newer technology available that could be helpful to us, or maybe at least worth made aware of.

are you still taking l-reuteri if yes how long and had results if yes which ones? I am sorry my english skills are bad.

No I am not. I dont plan on going back to taking this either. I am actually looking at the opposite scenario where there could be increased histamine h2 receptor activity that could shift or disrupt a th1/th2 immune balance to th2 dominance. Im looking to stimulate the immune system, not suppress it as increased h2 receptor function can be known for. l reuteri activates h2 and possibly suppresses h1 functions.

Ok thanks for the reply. And one more question what do you want to test now, do you want to continue in the same line of reasoning as the intestinal biome?

what do I want to test now? Gastric acid output would be a quick thought, prob not a easy, common test to come by.

This is what im looking at right now as far as Accutane.

Retinoids are used in the treatment of inflammatory skin diseases and malignancies, but studies characterizing the in vivo actions of these drugs in h…

Our results suggest that, by preventing the effect of histamine on IL-12 and IL-10 production, cimetidine may contribute to a restoration of Th1 responses

IL-12 and IL-10, respectively, stimulate Th1 and Th2 immune responses. The development of some allergic reactions, infections, and tumors are associated with excessive histamine production and a shift toward Th2 responses. Here we address the...

scratch cimetidine though, it has off target antiandrogen effects. The newer h2 blockers shouldnt (hopefully)
So im looking at histamine possibly playing a role, and yes bacteria can contribute and take away from the histamine pool. Also there could be numerous substances that could trigger histamine release that could also be a problem. Idk, just some thoughts that havent been fully explored.
On h2 dosage im looking at trialing 60mg pepcid ac every 6 hours or 4 times a day for now.