Recommendations on what to do?

Struggling to decide what I want to do next for my particular situation. I’m currently on Clomid therapy and have had some setbacks. Along the way below there’s some interesting anecdotes about my experience with PFS and getting on clomid/anatrazole under the guidance of a doctor. I’ve charted out my bloodwork on an image below along with the severity of my symptoms as well as when I started clomid/anaztrazole therapy.

About me: 30yr old dude. Fit and have never had any prior health related issues.

Long story short, I experienced some severe symptoms about a year into taking finasteride (loss of libido, severe ED, loss of interest in things). I started having those symptoms while taking the drug and stopped. Then I crashed pretty hard. Couldn’t even get a boner if my life depended on it. I tried. Severe brain fog. Anxiety. It was bad and it was definitely caused by finasteride. About 2 months later I’d recovered a bit but not 100%. Libido issues and ED have been the persistent symptoms that are most salient but I’m sure there’s more subtle ones as well.

I took a blood test and my T was really low for a 29yr old dude at the time (blood test 1 and 2 on the chart). Spoke to a doctor and got on clomid / anaztrazole. 45mg of clomid every other day and 1mg of anaztrazole every week.

My symptoms improved but not fully. If I abstained from sex for a while I’d get interested and be “capable” with 5mg of Cialis but as soon as I had it, interest would go away for two days. I’m somewhat capable in those two days with higher doses of Cialis but don’t really want to. This has become a problem a few times now with disappointing budding relationships. Mentally through this period I was great. Physically I was great.

Got a new blood test (3). T was through the roof from the clomid therapy. E was also very very high. I’ve never had any of the high E symptoms described in some places like gyno, etc. Doctor recommend to reduce clomid usage to 45mg every three days and increase anaztrazole to 1mg every 3 days.

My libido would come and go during this period. I’d spend a few weeks motivated to pursue crushes etc. before completely blowing them off because I became uninterested (not because we had sex, just because)…and the cycle would repeat. This was weird.

I checked in on my bloods on test 4 in august. T was a bit lower but high. E was high. I thought perhaps it was high E causing my issues but decided to wait and see.

I realized that looking at girls had become about as arousing as rocks at some point. Achieving an erection was difficult. This scared me. When I realized it, I realized that my loss of libido and ED difficulty was nearly as bad as my initial finasteride crash…but without any of the aggressive mental sides.

At this point I started researching AI’s and didn’t love reading about peoples reports about experiencing PFS style persistent symptoms from AIs as well! This also scared me.

I also started researching symptoms of high E2 I that sort of lined up with how I felt other than most of the physiological symptoms that people experience. With that being said, I have gained a few kg and craved a lot of fatty foods in the last month so maybe they are linked.

I’m torn now whether my current libido/ED issues may have been do to the high E, worsening of PFS and new issues I’ve induced with taking an AI. I don’t know whether to follow his recommend or do something different. In my mind, here are the options.

Option A
Stop both clomid and anaztrazole.
The clomid will likely continue doing its thing for a month while the direct effects of anaztrazole will diminish quickly. My E will likely go even higher due to the clomid continuing to operate. It will take 2-3 months for my body to stabilize. My T might stay high or it might go back to where it was post finasteride and pre-clomid.

Option B
Do as the doctor says. If high E is the cause of my symptoms then I should know relatively quickly (two weeks). I am a little apprehensive about the dosage of anaztrazole he is recommending.

Option C
Stop clomid and continue on the AI for a few weeks to progressively lower by E without going too aggressive on the AI.

Option D
Something in-between the above.

So, with the collective experience of members of this board what would your advice for me be?

Thank you for taking the time. Cheers 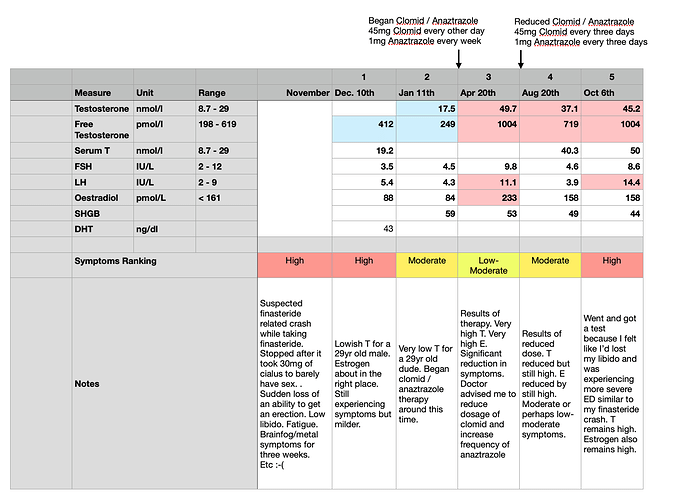