Did anyone see the email from PFS foundation today?

@Sugarhouse , I’m curious on your thoughts about this. Obviously, there are two main bodies we can try to donate to. Based on the below, it seems that what Milan is working on and what the upcoming study PFS network is attempting to undergo, are looking to target similar outcomes.

I’m curious as to how we should to allocate funds when donating. I’m also curious about the significance of these findings, though doesn’t look like the study is published yet so maybe we’ll have to wait on that. 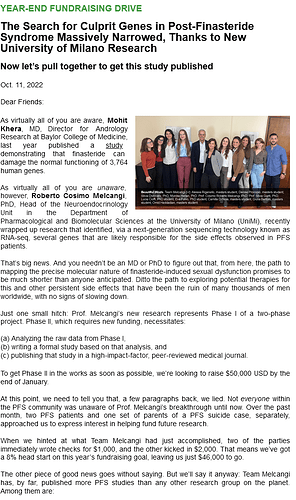 It was a bit of a shock receiving the email from the foundation today. It sounds really positive though and like a breakthrough has been made. $50,000 seems like quite a small amount, and so hopefully it won’t take long to raise the cash.

Yes there is a big discussion on all chat groups about this, but it should be discussed here on propecia help because here is the centrum of all pfs victims. And all sufferers should be involved.

(In my personal view I think it seems to be a good study downstream the root case examined in the Kiel study and screening the genetic predisposition in the Genome study?!)

Screenshot is pretty light on details. Has anything been released as far as sample size, patient profiles, or methodology? It says the research identified several genes likely responsible for PFS but analyzing the raw data is in the next phase? We know more details about PFSN’s project and that hasn’t even started yet.

Hello all, we have sent a PM to OP and those interested in the study with our position. We would prefer to discuss privately rather than have this thread snowball into a debate about the merits of the study, so if you’re interested in donating and would like to know our position, please feel free to reach out privately.

This has been posted elsewhere, but here is PFS Network’s position on this latest announcement.

We have received many inquiries from patients related to the PFS Foundation’s latest announcement of a fundraising drive to support new research from Prof. Melcangi’s group at the University of Milan. Patients have rightly asked how they should approach this announcement and whether this study is worthwhile contributing to. While on the surface this announcement seems promising, we at PFS Network have some concerns.

Past research into PFS has largely not adequately acknowledged the complete clinical picture and breadth of symptoms that have been reported by patients for over two decades. This is true of Prof. Melcangi’s own research, which has notably ignored physical symptoms that can be debilitating for many patients. Instead, symptoms have been fitted around his hypotheses, rather than vice versa. Given the rarity of this condition and therefore the limited size of our community, we simply cannot continue to support projects that do not acknowledge all symptoms of the disease and are not grounded in the clinical reality affecting patients. Doing so would put a drain on what are already limited resources we have at our disposal. Until Prof. Melcangi’s group can demonstrate such a complete picture, and present a hypothesis which can plausibly explain all of the symptoms being reported, we cannot support this work.

Additionally, Prof. Melcangi wrote to our charity two months ago requesting assistance for a completely unrelated study. We are concerned that the approach being taken at the University of Milan is haphazard and directionless, and lacks a clear trueline. As a patient-led charity, primarily focused on advocating for a small, vulnerable, and neglected patient community, we cannot endorse this.

We are also deeply concerned with the way this study has been presented to a vulnerable and desperate patient community. The work has been presented as a “breakthrough” which has “massively narrowed” the genes involved in PFS. Some clarification on what has been narrowed down (the genes which predispose patients to developing PFS or the pathomechanisms involved) would be helpful. There is an alarming lack of detail. As far as our group is aware, the RNA sequencing involved does not involve human samples, but rather an experimental rat model. Without an understanding of the pathomechanisms or genetic components involved in PFS, a rigorous and accurate animal model simply does not exist.

Over the past few years, our group has been in consultation with well-credentialed geneticists, including some of the top experts in the field. For this announcement to make such claims is not only extraordinary, but entirely irresponsible. To draw meaningful insights from any genetic study, huge statistical power is required, which is not the case here. These bold claims being made to a vulnerable patient community are concerning and dangerous.

To summarise: PFSN is concerned with the way this study has been presented to the community. Furthermore, while we are left without a clear outline of the methodology or study’s parameters, we are skeptical of the study’s design and the accuracy of the animal model that’s been used. While we will not be supporting this study financially, if patients wish to allocate funds to this work they should feel free to do so. However, given our fundamental concerns, we cannot allow patients to use our platform to solicit funds for this. If you wish to discuss the study, you are more than welcome, but any direct attempts to solicit funds will be removed.

If you are seriously contemplating a contribution and would like to ask additional questions, please feel free to reach out privately.

I want to be very clear here: this is the only statement we are going to make in relation to the study. If patients wish to direct their own funds to it, they are free to do so, however we cannot allow for soliciting on our platform.

We need more information about the study…

Epigenetics is poorly understood and the design of these studies make no sense to the average lay person.

To my knowledge there isn’t any additional information on the study, aside from what the PFS Foundation has provided in their email (which may be misleading, as was noted in the PFSN response).

You’re right that there’s a lot of ambiguity about the study, which adds to my personal skepticism about it.

If you wish to learn more, I guess I’d ask the Foundation. Though, from what I understand, they don’t have any additional info at this time.

i wont fund that study

sounds like to me Melcangi’s research is purposely ignoring information. if thats the case then the money thrown there would be a waste of resources and time

and if it’s not on purpose, then it would still be a waste of resources and time

rather support PFS network initiatives we have going on

I second that. I’m not funding another poorly conceived study involving rats on finasteride, which doesn’t necessarily have anything to do with PFS.

Someone should just do a mRNA study on PFS patients, people using fin without issues and a control group.

Then we would know what genes are involved.

We are indeed looking at a genetics study and have put out a call for expressions of interest. We’re probably 30 or so patients away from having enough interest to start discussing with researchers what that could look like.

One of the biggest challenges we’ve come across in the past with this is the control group. It would be very large and under the supervision of someone administering the drug, most probably a dermatologist or hair loss clinic. As you can imagine it would be extremely challenging to find one willing to participate given the inherent implications.

There is a lot of merit to a good genetics study though, so hopefully we get the numbers to at least try.

Past research into PFS has largely not adequately acknowledged the complete clinical picture and breadth of symptoms that have been reported by patients for over two decades. This is true of Prof. Melcangi’s own research, which has notably ignored physical symptoms that can be debilitating for many patients. Instead, symptoms have been fitted around his hypotheses, rather than vice versa.

I don’t know about this particular study that was mailed around but if you are very concerned abt the list of symptoms, and I would understand why you might be, I would encourage you to email Dr. Melcangi directly to ask him about that. PFS is a multi-systemic syndrome and I have prob seen dozens of symptoms as it affects everybody differently but I would imagine he would be able to address your concern on this front.

Neurosteroids regulate neuroplasticity which regulates the brain’s connection to every other biological system so there is very good reason to believe that a disruption could cause a very wide range of symptoms. As PFS is multi-systemic, I think this problem will not be sufficiently understood unless it is investigate from many different angles.

I’m not sure if this frustration that he hasn’t written about all the different symptoms is based on conversations with him or an assumption based on what he’s written. If it is just the latter, I would def want to check with him first before drawing that conclusion.

If you look at the wiki page for Neurosteroid function there are a million very different things that are regulated by neurosteroids and finasteride blocks conversion of many neurosteroids in addition to hormones as a primary effect of the drug. Neurosteroids are also closely involved w epigenetic regulation. All of these things are likely involved and very complex and not yet well understood unfortunately.

Some major known biological functions of neurosteroids include modulation of neural plasticity, learning and memory processes, behavior, and seizure susceptibility, as well as responses to stress, anxiety, and depression. Neurosteroids also appear to play an important role in various sexually-dimorphic behaviors and emotional responses. Acute stress elevates the levels of inhibitory neurosteroids like allopregnanolone, and these neurosteroids are known to counteract many of the effects of stress...

Neurosteroids Involvement in the Epigenetic Control of Memory Formation and...

Memory is our ability to store and remember past experiences; it is the result of changes in neuronal circuits of specific brain areas as the hippocampus. During memory formation, neurons integrate their functions and increase the strength of their...