So I went through a dietician to see about knocking out inflammatory foods, and she recommended a MRT test , basically measures your response to foods via your blood. I’ll post my results as an example to anybody looking to lower overall inflammation. Didn’t really respond to much besides avocados, bananas. She told me that for a general rule, yellow and red are the same in terms of inflammation and damage in the body. She told me that someone sensitive to foods, like avocados or bananas, can have symptoms up to 10 days after ingesting even a small amount. The thought of stuff like that I eat on a regular basis. I wonder if I eliminated it all, how I would feel in a few months time… idk pretty interesting. 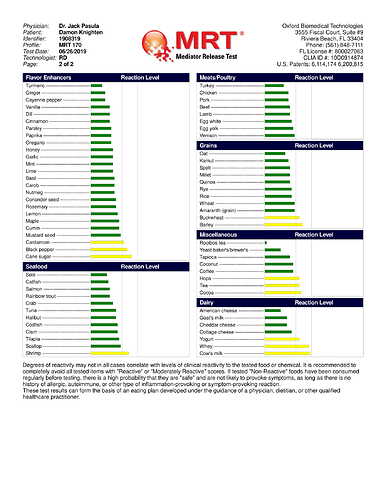 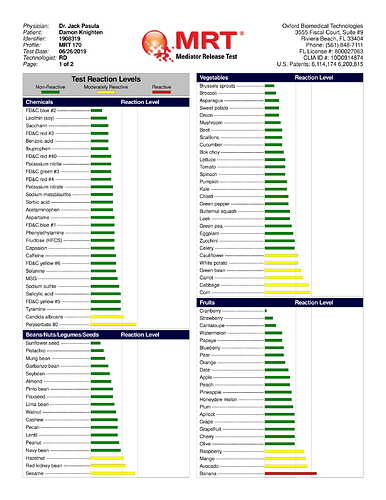 Anything that’s featured on quack watch is probably worth avoiding.

I appreciate it, I’m wary of all of it too, especially because she “prescribed” some very expensive DHA and Probiotic supplements. Such a bullshit industry that revolves around health & wellness man. If you have a chronic health issue like PFS you are in a world of fucking trouble. It is so eye-opening dude. A chronic health issue will drive you flat broke and in debt just trying to figure out what is even going on. It’s incredible.

Something worth mentioning and really the only reason I’m optimistic is when I was working as a PT tech in an outpatient clinic in my hometown, there was an occupational therapist, an educated higher class woman, who randomly in her 40s had horrible reactions to foods and felt like utter shit for the better part of a year. She went on a very limited, healthy diet and nothing changed. Before seeing patients, she would have go to in the back and lay down so that she could see straight. Had horrible brain fog, pressure around her eyes and head, fatigue all the time, etc. She got connected with this same dietician and some of these things really did change her life. So we shall see. If i can, at the least, experiment with this and see if I can leave out foods I’m sensitive too or whatever it’ll be worth it in the long run I guess.

Yeah, it’s disgusting how people will exploit others.

From the same link, if you’re interested, it might be worth recording your food intake and going from there:

The correct way to assess a suspected food allergy or intolerance is to begin with a careful record of food intake and symptoms over a period of several weeks. Symptoms such as swollen lips or eyes, hives, or skin rash may be allergy-related, particularly if they occur within a few minutes (up to two hours) after eating. Diarrhea may be related to a food intolerance. Vague symptoms such as dizziness, weakness, or fatigue are unlikely to be food-related. The history-taking procedure should note the suspected foods, the amounts consumed, the length of time between ingestion and symptoms, whether there is a consistent pattern of symptoms after the food is consumed, and several other factors. Although nearly any food can cause an allergic reaction, a few foods account for about 90% of reactions. Among adults these foods are peanuts, nuts, fish, and shellfish. Among children, they are egg, milk, peanuts, soy, and wheat [14].

If significant symptoms occur, the next step should be to see whether avoiding suspected foods for several weeks prevents possible allergy-related symptoms from recurring. If so, the suspected foods could be reintroduced one at a time to see whether symptoms can be reproduced. However, if the symptoms include hives, vomiting, swollen throat, wheezing, or other difficulty in breathing, continued self-testing could be dangerous, so an allergist should be consulted.

Proper medical evaluation—done best by an allergist—will include careful review of your history and skin testing with food extracts (using a prick or puncture technique) to see whether an allergic mechanism is involved in your symptoms. In cases where skin testing might be dangerous, a radioactive allergy sensitivity test (RAST) may be appropriate. The RAST is a laboratory test in which the technician mixes a sample of the patient’s blood with various food extracts to see whether antibodies to food proteins are present in the blood. It is not as reliable as skin testing and is more expensive. A negative prick or RAST test indicates a low probability of allergy to the test substance. Positive tests, however, have much less predictive value [1].

The only sure way to diagnose an allergy to a suspected food, food coloring, or other additive is challenge testing in which the patient ingests either the suspected food or a placebo [14]. This may be appropriate if the patient’s history suggests a food allergy but the skin or RAST tests are negative. Because dangerous reactions can occur, challenge testing should be done in a hospital or office that is specially equipped for that purpose