I'm posting all of my blood work. Thoughts?

Sorry, they’re in German. Most of it is basically the same as in English, but I’ll try to translate a few things: Leber > liver, Schilddrüse > Thyroid

I’m most concerned with my Testosterone (free and bioavailable) which rose from 24nmol and 700ngdl in April to 39nmol in July and stayed at 40nmol until now and my Vitamin D but some other things might be unusual for a 17 year old even though they’re within range but I don’t really know. I’m still waiting for my DHT. I already went to an endocrinologist with all of these and she hardly knew what fin was or even cared about the blood work, basically laughed at my whole story. Just told me my T was enviable and that I should go outside more often. Just ridiculous. 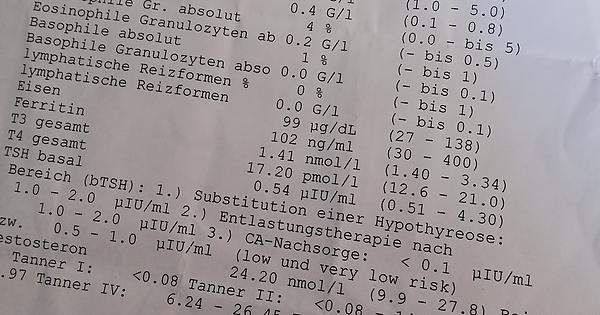 You need to translate these so people can interpret the readings

Most of it like testosterone, estradiol (östradiol) looks about the same. I might translate it later, but it’ll be tedious…

Translate them to English nobody can interpret those readings.

If Free T is too high it might be that your body is not able to convert correctly T molecules to regulate the metabolism. For example, because of 5 alpha reductase deficiency.

Do you have DHT result ? I cannot find it.

Please DO NOT take for granted or truth anything that I could write. It is just thought and hypothesis.