I didn’t mean overt corruption involving bribery, but it’s quite clear their main interest is not public health and safety. If it were they would have taken this matter much more seriously and acted appropriately. FDA management have a track record of working for big pharmaceutical companies. There isn’t a clear and respected boundary between them which would be necessary for the interests of the public to be safeguarded.

“In 2011, two years after the Merck risk analysis, FDA analysts disagreed about adding a warning related to suicide, but the regulator ultimately agreed with Merck that the number of suicides was lower than one would expect in that group of patients. Since that decision, the FDA has received more than 700 reports of suicide and suicidal thoughts among people taking versions of the drug.”

If the fda banned every drug that got 700 reports of side effects you’d probably not be able to buy a cough syrup.

I assume someone at Reuters is very much on our side and thank God they are, because we need all the help we can get.

I have to say that as a community we need to normalise reporting symptoms.

have to say that as a community we need to normalise reporting symptoms.

So much under reporting its ridiculous. Sufferers complain on here continuously yet not many report their symptoms. it should be a pre requisute to being a member of this group.

I think the problem with ‘suicidal thoughts’ and especially ‘suicide’ is that the people who really suffer from those things are struggling to survive, and less likely to report they’re going through those things. Obviously someone who committed suicide is dependent on loved ones for reports.
Also I think if you would look at the numbers of ‘depression’ or ‘severe depression’ being reported then it would probably be much higher than 700 cases, when those symptoms are just as likely to result in eventual suicide or suicidal thoughts.

It is a skewed and sneaky way of making the problem less prominent than it is, imho.

Another thing is that suicidal thoughts obscures the issue, making it sound like some sort of abstract voice in one’s head. If they said suicidal thoughts resulting from severe multisystemic endocrine disruption one would have a clear and accurate view of what’s at stake.

Rather than seeing it as a loss, we should see it as a small victory in my opinion.

Let’s be honest, FDA pulling it off the market without any hard evidence was never going to happen. Best case scenario they would put a black box warning, like the one on Accutane.

I’m sure we all wanted “more” but a little is more than nothing. Even with baby steps we will reach the destination given enough time.

Bingo. Two articles have been posted now about this decision and both perpetuate the already publicized notion that simply ingesting Propecia can hypnotize weak-minded fools into killing themselves while continuing to ignore the catastrophic post-drug condition that forces victims down that path.

Every instance of missing the point is a step in the wrong direction IMO and all this does is formalize one very big missed point.

Pharma rent boys!! But our life’s are violated against our will!!

I’ll once commit suicide because of complete Lobotomization and chemical castration from finasteride. I was a very healthy man before I took finasteride and I had enjoyed my life!!

So FDAs and other regular agencies I wish once you’ll or your sons get PFS, than you stopp denying this inhuman biohazard and it’s suicidal side effects.

The FDA seems totally inconsistent in their standards for pulling products off the market. In the case of Finasteride, they claim that there isn’t reasonable evidence of a causal link between Propecia and persistent sexual problems, but they recently decided to pull Juul e-cigarettes off the market because there isn’t evidence that they are safe. Seriously, look at this article.

"The FDA acknowledged that it “has not received clinical information to suggest an immediate hazard associated” with the use of Juul’s devices or pods, but said the agency issued its marketing denial orders (MDOs) against the company because “there is insufficient evidence to assess the potential toxicological risks” of using the products.`` 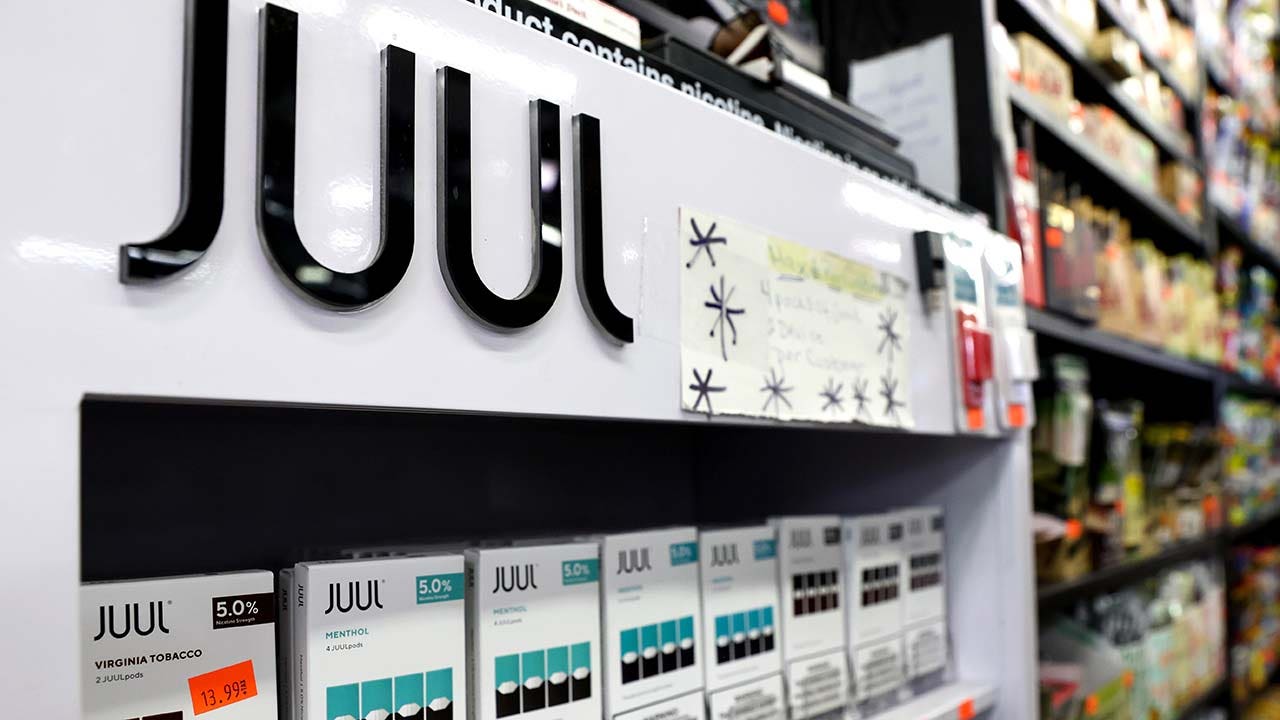 The Food and Drug Administration has ordered Juul Labs Inc. to stop selling its vaping products in the U.S., saying the products could be unsafe.

The FDA, in its press release, directed smokers who want to quit to consider using other e-cigarette products the agency has authorized for use, such as R.J. Reynolds’ Vuse projects.

The harsh reality of our struggle is that most ppl see PFS patients as an inconvenient nuisance esp since young balding men are not a sympathetic social category.

People have cared about cigarettes and nicotine for decades and everybody knows that the tobacco industry has held a death grip on Americans for generations.

I think what is needed is some other reason to get people interested in PFS. The FDA refused to even disclose that finasteride disrupts neurosteroid production on the product label and they gave a totally lazy and BS reason. But when people start to get interested in the underlying science, people will be more likely to look at PFS patients as an interesting and tragic case study.

Neurosteroid science is beyond the scope of mainstream science now, epigenetics is practically further out in my opinion, but once the causal scientific mechanisms start to become clearer and more practical, people will possibly be willing to revisit this.

Sage Therapeutics had a trial for brexanalone for major depression but it failed largely because they tried to cut corners and design a bad clinical trial. I think they are trying it again with a better designed study.

EDIT: It looks like Sage (with Biogen) recently re-did their phase 3 trials for the pill version of Zuranolone for major depression and the results were acceptable. They’ll apply for an NDA by the end of 2022 and hopefully this drug will be available to try for PFS patients to see if it an provide any symptomatic relief.

Sage Therapeutics had a trial for brexanalone for major depression but it failed largely because they tried to cut corners and design a bad clinical trial. I think they are trying it again with a better designed study.

To be honest I don’t think we can accurately say whether or not we are a sympathetic social category. There are different ways to view our situation. A narrative involving impressionable young people who have their insecurities preyed upon is not necessarily unsympathetic. I could see how that narrative could garner significant sympathy.

Recovering drug addicts get sympathy in society. Why shouldn’t we? They knowingly abused things which are known to be harmful. We did nothing wrong and will get sympathy when we are more vocal. It’s only now that patients are really starting to speak out.

I’ve seen you write this before, is this how people have reacted when you have shared what’s happened to you? All of the people I have told have been supportive, some find it difficult to understand but they certainly haven’t been dismissive of my problems.

I’m sure botched cosmetic surgery victims get support from loved ones too. I think by ‘most ppl’ @Frustrated was talking about the world at large, not our friends and family.

I can see your point. I don’t think it’s much of a barrier to progress though. Our group are small in number, but not tiny. 1000 patients donating €100 a month would be enough for multiple studies per year. It’s a lot of money, but it’s difficult to put a price on health. Add on top of that support from personal networks and we could make a real dent in this problem pretty quickly.

The shit is until we have a biomarker to identify PFS the medical community denys the existence of this horrible syndrome. No ICD 10 entry, no disease. That’s the fact. If we get the entry, they say ok you have been fucked with PFS but you can’t sue Merck because Merck doesn’t sell it anymore. And to your time they didn’t know about PFS as a disease. The only thing, they make than a microscopical miniature advice in anecdotal cases patients reported a PFS anywhere at the miniature leaflet.

It’s s long fight. Only if prince Harry for example gets PFS the entire world is crying and people delight thousands of candles and headlines all over the world.

It’s not much different though is it? They trusted doctors who prey on insecurities and when things go wrong doctors hide behind their lawyers. It’s socially acceptable enough that celebrities do it and even they get screwed up. Your refusal to accept or believe it kind of belies the same level of sympathy we should expect, no?

A 19 year old boy is chemically castrated and lobotomised for taking a mass marketed drug that his doctor told him was perfectly safe. He then commits suicide.

A 19 year old junkie continually shoots heroin into his arm after having been warned his entire life that heroin is destructive and harmful. He overdoses and dies.

Objectively speaking, the former narrative is far more sympathetic. It just needs to be promoted and humanised. Which is what is happening now with people finally speaking out.