Hey,
I’m looking into the drug Epristeride and it seems that it is impossible to find any clinical data from the studies from this drug, I’ve even checked on China search engines and little information is found. What’s interesting is that this drug was stopped at phase 3 clinical trials by GSK and is now only available and licensed in China by them. It’s ridiculous that I literally could not find anything on this drug that was meaningful, I’d like to think there was enough data on it for it to reach phase 3 in clinical trials and then to be licensed. Now is it possible to obtain this clinical data by requesting it directly from GSK using the freedom of information act the reason I’m asking is because I think we may find some critical data that may be useful in determining how these drugs are causing so much damage.

Epristeride is a 5AR inhibitor that only reduces blood DHT levels by 25 to 54%. It could be useful for our condition.

How do you mean?

Well lots of people get improvement with antiandrogenic substances due to AR overexpression, the problem is that it can also lead to a crash if the antiandrogenic effect is too strong. This drug only partly depletes DHT so it could be useful, but also dangerous obviously.

And now I understand what you meant, that maybe the data from the clinical trials could reveal something about how PFS works. Unfortunately I couldn’t find anything either.

This is a conversation I’ve been having with another member privately who has went on dutasteride to mitigate his PFS sides and taper off however I did mention that taking Epristeride would be a better way to taper off as it reduces DHT levels to a much smaller degree thus he might avoid a crash while rebooting hormonal system. I believe taking 1mg of finasteride to inhibit the hormones again would unlock the receptors as the body then senses an inhibition then taking low dose Epristeride over the course of a month to avoid hormonal crash could reset us.

Yes it very crummy that there isn’t a drop of data that can be found about it I’m going to call them tomorrow.

I will admit if I don’t see any improvements in myself over the next coming months or a further deterioration I will give this a shot and I believe those that tried finasteride again blindsided didn’t take into account that finasteride causes a massive spike in DHT after 2 weeks of stopping the spike is really unbelievable and the fact that we have an over expression of the androgen receptors is just an accident waiting to happen. 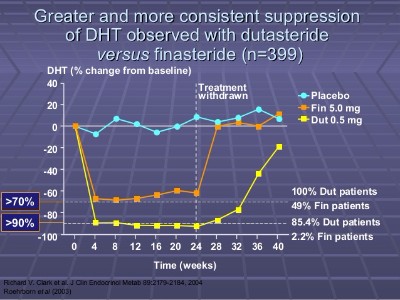 Finasteride has a half-life of 5-6 hours whilst dutasteride’s half-life is 4-5 weeks.

It’s the spike in DHT that is much higher in finasteride after cessation which is why I think more people have sides from it.

*Within 7 days of quitting the 5ARI medication…baseline DHT levels are restored (91). Following the suppression of DHT by over 70% while on the medication (i.e. finasteride) (91), the return of baseline DHT levels represents a rapid increase of DHT concentrations at the cellular level by over 333% (from 30% to 100%, which equates to 1 / 0.3 = 3.33). Depending on where the body has determined the reference point for “normal” androgen levels to be (i.e. 30% mark or 100% mark), and assuming the body has become “accustomed” to a significantly reduced level of DHT (and thus gene expression) while on the medication, we postulate that a rapid restoration of baseline (100%) DHT levels after a period of deprivation may be perceived as excessive by the body…in effect, all dependent downstream processes (e.g. induction of 3α-HSD enzyme) become downregulated.

This is gold and only furthers my suspicions that this could work the idea has also been proposed by another doctor on the forum.

I just want to clarify - after reading the posts on this page more carefully - that there appears to have been confusion in repeating the theory: there is no utility in people who have PFS going back on the drug and tapering off. That makes no sense.

Another point to emphasise is that it is very, very difficult to taper off the dose because of the potency of the drug at low doses. I was only able to do so because I have access to a university laboratory allowing me to measure out doses of the finasteride down to 0.01mg.

There are other means to achieve this but the point is that it is very difficult to taper off and I therefore believe few people have truly undergone a tapering regime. Tapering basically involves going from 0.05mg/day to 0.01mg/day over a period of time (or an approximation of this). Quartering or even dividing propecia into eighths will not achieve this. In other words, it is possible that no one has ever tapered off really effectively (although some diligent souls might have achieved some portion of this).

Hey guys very strange I rang GSK in England and was put onto a receptionist of which I asked for data based on the drug named epristeride, I could hear her typing, she didn’t say a word then automatically redirected me to some hospital that went straight onto an answering machine.

So I finally got through guys and spoke with a fellow Irish women they asked a lot of questions why I was looking to obtain the data, was I scientist, was I taking the drug etc I told her that I wanted to obtain the clinical data on the drug and she said that she would have to speak with management and was unsure if they were able to hand out information on a drug that isn’t available in the UK or Ireland. Just updating if anyone is actually interested

Hmm strange, you think they are willingly withholding the data?

I think a lot of PFS sufferers are dealing with a term coined as withdrawal syndrome after trying to get a better understanding of this condition over the last few months I have decided to look elsewhere, particularly in people who took SSRI’s who try to go off them cold turkey only to be followed with an array of new neurological and physical symptoms many go back on the drug then taper off this is my general understanding of what I have picked up on forums from the people more experienced and who heavily insist in tapering as do doctors so why wouldn’t the same mechanism be applied with finasteride and yes we can’t taper because it has a flat dose response meaning even if we cut it down to 0.2mg it is exactly the same as taking 1mg so we would have to get finasteride right down to 0.01% probably in a liquid solution a good pharmacist could do it. We know for a fact looking at this forum that many users suffer a “crash” this crash is suspected to be hormones coming back into the system at full speed which shut the receptors off as a self protection mechanism. When we take the first pill of finasteride it inhibits 70% of DHT levels for up to 2 weeks after the 2 week mark DHT levels dramatically rise in the body it’s around this time that the majority of people crash because we didn’t taper.

Information I picked up
What causes SSRI withdrawal? Why can some people quit without problems?”

A: The physiological nature of SSRI withdrawal is not well understood, nor is the reason that some have more difficulty with it than others. It is, however, likely that different genetic profiles related to serotonin receptors, etc leads to different levels of severity, different symptom profiles, and ultimately different rates of recovery.
Taking an SSRI causes a variety of neurophysiological changes to occur. Oppositional processes begin almost immediately to offset and adapt to the changes they produce in your brain. Reversing these processes when discontinuing an SSRI is likely a complex, non-linear process that depends on the individual.

|> Q: “Why does this group (and others online) recommend such a slow tapering regimen?”

|===| A: Very slow, non-linear tapering (meaning your reductions will become smaller as you continue to decrease your dose) seems to be the only way to minimize the chances of severe withdrawal symptoms. You will find many accounts of people who have failed two, three, four or more different attempts at tapering until going this route. It can be frustratingly slow, with many people wanting to get the drug out of their system as soon as possible, but we implore you to resist the temptation to do so. This group recommends tapering 5-10% of your dose every 4-6 weeks. (Example: if you are going to try 10%, and your starting dose is 10mg, you would reduce to 9mg, then 8.1mg, then 7.3mg, then 6.6mg, etc.)

Unlike many other drugs, tapering SSRIs can be complex and confusing:

For more information, and a possible scientific explanation for why slow, non-linear tapering is important, see the following:

|> Q: How do I taper so slowly if they don’t make tablets for each step down?

|===| A: There are a variety of methods to accomplish this.

Although suggested by some physicians, alternating doses is not recommended and has given people problems. The exception to this is Prozac, which has a very long half life that minimizes the effects of irregular dosing.

|> Q: What symptoms can I expect tapering or stopping an SSRI?

|> Q: What should I start/avoid during tapering and withdrawal to ease symptoms?

|===| A: Like the withdrawal process itself, everyone seems to react differently, but there are some common patterns. These rules are not hard and fast, but they seem to help many people during this process.
Stimulating substances such as caffeine, nicotine and related commonly exacerbate symptoms and should be avoided. During withdrawal, your sympathetic nervous syndrome can feel like it’s in overdrive, and any further stimulation can cause anxiety, agitation, and overall worsened symptoms.
It cannot be overstated how much one’s diet can affect the course of withdrawal. Sugar and refined grains seem to commonly exacerbate symptoms for many people, as does the ingestion of alcohol.
Many people find regular, moderate exercise to be enormously helpful during withdrawal.
Above all, as you will likely be very sensitive to stress and confrontation, it is best to reduce this as much as is possible in your life.

However, I strongly believe that tapering off is the right approach to overcome PFS. I will keep you guys posted about my experience with Dutasteride tapering off. I think that Dutasteride has a certain tapering off mechanism already built in but we need to utilize it correctly.

Hi - I think you’re brave for it, and yes please please do.

There is probably millions of finasteride molecules in a single pill a single pill completely wrecked me and has done with others. It’s an incredibly powerful drug that can stay in the system for up to 30 days and is certainly enough to inhibit DHT for 2 weeks until it floods back in the system.

Yeah, I actually believe Dutasteride is a more safer drug then Finasteride because of the slow rise in DHT. I’m looking forward to hearing your outcome this is my only hope and I have also been able to obtain Epristeride but only in powder form should arrive in the next couple of weeks.