6 days have passed and it has turned into complete impotence. Numb penis and smaller than before. Doesn’t even react to stimulation, which it did after my first bad reaction to the pill at least. This morning I managed to stim a firm morning erection for a while, but later in the afternoon, could not even get a semi, with my gf’s help nor myself. Nothing. Lifeless and flat. Even with excessive stim.

Any suggestions? Inital blood tests were all normal, but just went for some more and a prostate exam. Prostate is a little large but nothing to be concerned about apparently.

Any advice or things to calm me down would be appreciated. Feeling suicidal but psychiatrist gave me bupropion and sleeping pills which have zoned me out a bit. (Apologies to all those I’ve bugged on here so far)

My anhedonia is not there like the first time, which makes the realization of my symptoms all the more terrifying. I’m worried about lack of bloodflow. Please shed any wisdom. I’m willing to go all guns blazing if I have to

Welcome to our community.

Sorry about your pain. You need to take a deep breath and relax. You sound like you had the typical PFS crash. An initial crash followed by a brief recovery then another crash setting in. Care to share your bloodwork? What other tests have you done? Any other symptoms beside low libido and andedonia? In all seriousness, you have a great chance to recover naturally without any interference on your part. Taking only a single pill works in your favour. It may take a couple weeks up to a year or rarely longer (but that’s a remote possibility). Worrying too much will trigger unnecessary “stress” and delay recovery. This is easier said than done but you need to try your best. Get well soon! 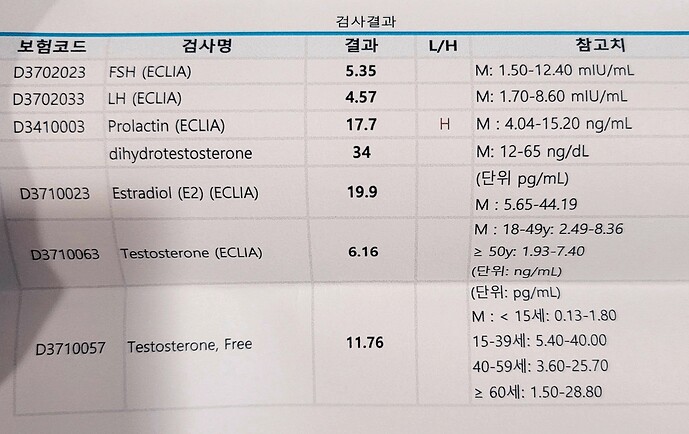 20201006_0029122742×1728 961 KB
Thank you for your reply @doomed80. I’ve attached the results of my initial result I had done just one week after my first pill. Only prolactin was slightly high. dht test cost 400 dollars! Crazy. Also had a prostate exam today. Slightly over enlarged but nothing to worry about they said.
Thanks for your words of encouragement buddy.
Make anything of these results?
I’ll update my new results after the recent crash when they come in

Other symptoms are impotence and shrinkage when flaccid. (When I can stimulate an erection it is big as usual, just less feeling)

What have you been doing different recently.

No worries. Yes, I see your prolactin is on the high side. Prolactin is antagonistic to Dopamine (a neurotransmitter) and interfere with libido. But yours is not sky high and it may normalize given sometime. Your estrogen (E2) is borderline low. I suppose this is the regular E2 test (mainly used for women) and not the sensitive test. If that’s the case, then your actual E2 may be even lower. See E2 also controls libido and most men feel great when E2 is around 22-35 but you’re almost there. So I suggest that you don’t try anything that lowers E2 further and just wait it out. Btw, your testosterone and DHT are both fine. Your T/E2 ratio is 30. I observed most men feel best when ratio is 15-25. Again, your test results are fine with the exceptions of lowish E2 and highish Prolactin.

Not suffering other sides is great news! Try and lift some weights, sleep 7-8 hrs per night, eat 40% fat/30% protein/30% carbs and wait it out. With any luck, you’ll be just fine.

Nothing really. Fasting for 18 to 20s per day. I did a 56 hour fast a couple days before my sudden recovery and so continued to intermittent fast. Maybe I was being over sexual? Ejaculating 3 times in 3 hours sometimes. Could that have overestimulated my ARs leading to the crash? My refractory period was super low during recovery and could do it whenever I wanted. Which is weird… I’m usually just a once a day is enough kind of guy lol.

Since the crash… I’m not sure what I should be doing now… eat healthy? Fast more? Exercise? What do you think?

Thank you very much for your analysis man, I have no idea what normals are usual. I appreciate it. It appears that more so than my hormones being out of wack, my ARs are messed up, right?

If its my ARs that are screwed, any idea how I got sudden recovery after nearly a month for for over 3 weeks? Thanks!

And also would it be worth eating estrogen high foods? Eggs or whatnot?

I personally wouldn’t worry about ARs and I’ve taken both proscar and propecia for years (on and off) in addition to many other stuff. Hormones do take a while to re-balance and finesteride induces hormonal shift. Like I said, give it time and don’t over dwell on the idea that you’ll get the worst side effects. I’d worry about getting “mentally stressed out” more than anything at this point. You know when you’re constantly anxious your stress hormones will skyrocket and cause low testosterone, low growth hormone, maldigestion, disrupted sleep, altered immune system function and a slew of other unnecessary issues.

By raising Testosterone, your E2 will raise through conversion. So try and raise your testosterone.

Thanks buddy. Its just that I was rendered impotent after one 1mg pill of fin. Took it at night, woke up and it was dead down there. Can hormones be screwed that quickly? Isn’t it more likely to be DNA methylation? Or AR overload? (Although I suppose if DHT comes roaring back after a few days or weeks, it doesn’t explain instant impotence, and if they were methlayted, i don’t understand how i had a recovery randomly.)

I started with zero brain dick connection on first pill. After partial recovery, i could get psychgenic erections with no stim when with the gf. Now after crash, back to absolute zero brain dick connection. Is the fact I had this restoration at least once for quite a period of time a good sign my genes weren’t demethylated, or does demethylization also fluctuate and cause subsequent crashes?

Here are my updated results since crash 2 weeks ago. Isn’t my progesterone unusually high? Could this cause my loss of libido and impotence? 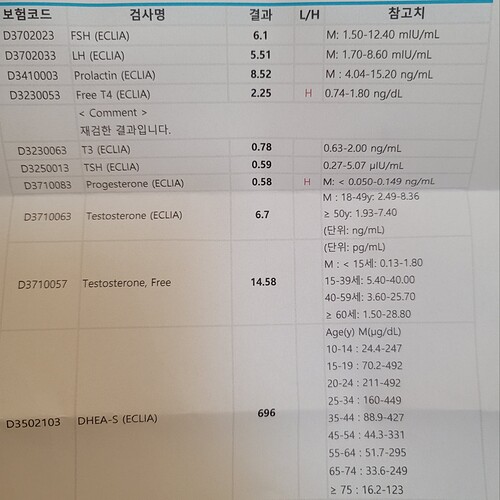 Hi, I have the same problem with progesterone as you. When I crushed my blood test indicate high progesterone levels. It is slowly going down now and I’m getting better every month. Progesterone works as 5 ARI. I truly believe that high progesterone in the main cause of PFS, at least for some people.

Any idea how to lower progesterone?

@doomed80 what do you think at these new results?

Was E2 tested @Tricky ? I can’t find it. Your level was borderline low (~19ish pg/ml) last time around. I’ve seen several scientific articles about E2 functioning as mediator for libido in men. That’s why I usually insist on having it tested to ensure it’s not low or high. Progesterone is said to share an inverse relationship with E2. So if E2 is raised, then Progesterone is reduced.

Your other lab values are mostly unremarkable with the exception of very high DHEA-s, which shouldn’t be a problem btw. I see that prolactin also normalized and that’s good news too.

The doctor for some reason didn’t include it… for goodness sake. Would it be worth going back to get it tested again? If it would make any difference that is…

As mentioned. The tested parameters are in good ranges and high prolactin normalized. Your total testosterone is decent in both tests and that rules out hypogonadism. What are your other symptoms, if any, beside libido fluctuations? I’d give it more time (3-6 months) and see how it goes. If problems persist, I’d include E2 and SHBG. Remember, hormones take a while to re-balance. You’ve taken only one pill, fortunately.

I’m not surprised your doctor dismissed E2. This is the case with many other doctors who believe E2 is mostly irrelevant in Men.