Chronic depression can cause all of the same symptoms

Since PFS is a rare condition, I wonder how many people here simply have depression or chronic depression but think they have PFS. Depression can cause low libido and all other symptoms. Just the fact that this condition exists might cause more harm than the condition itself, if enough people convince themselves they have it, when they are missing the true reason, like a vitamin, mineral or a difference deficiency.

my suggestion is win-win, it’s best for everyone to make sure that it’s not something else.

I’m suicidal from this horrible disease. I can’t laugh about such blaming people who fight for their lifes.

Are you a tressless redditor having fun about people suffering PFS???

There are guys fighting for their lives on here who have multitude of physical symptoms on top of neurological disorders .You’re either a very mild case or very thoughtless

I was very careful with what I said, this was basically a question. What do you people think? How many people only think they have it? Everything negative you read into came from your own views. I didn’t say whether this happens often or not at all. Worse case scenario is that someone tries something else that may or not work?
I know how serious PFS is, sometimes I wonder whether I shouldn’t be spending all my time warning people not to take it.

To me there is a big difference between persistent sides and PFS. I had a persistent side I got while on fin that lasted two years after I stopped. I came to this site several times to see if others had my side and not many did so I never considered it PFS. It was certainly not depression, it was a visible physical symptom. The last time I restarted fin my side recurred and I stopped again. Actual PFS…AR silencing and related physical destruction…started a week later.

So no I don’t think the prognosis divide here is depression cases vs PFS. I think for the most part it’s persistent sides vs PFS. If there is a depression-only faction it’s insignificant and likely easy to spot so I wouldn’t waste mental bandwidth wondering about it.

I will agree with the others that the original post wasn’t very clear in intent, especially the title makes it extremely dubious, so I understand their agitated reaction.

To give a straight answer to your question: I think there are very few people, if any, on here who do not have PAS/PSSD/PFS and are genuinely suffering from depression induced sexual side effects. They are most likely lurkers or probably not going to be here for very long.

The statement you make in this thread title is factually wrong and I honestly think it is rather odd you are worried about this.

As @Toughluck24 as already pointed out, depression cannot cause many of the symptoms reported by patients. 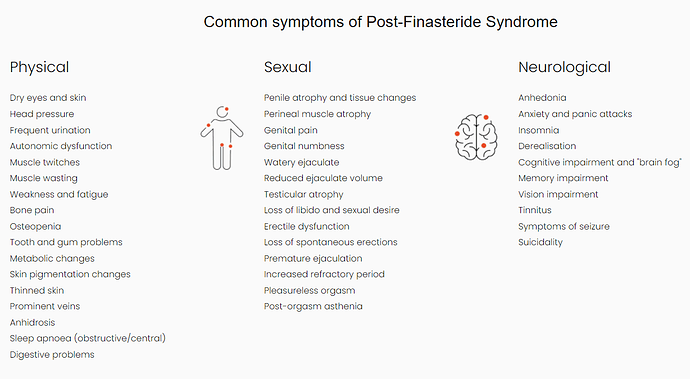 I don’t think you meant any ill-intent with your post, but you have to understand, many people here are not simply experiencing “ED and depression” or the other headline symptoms of PFS.

I can count at least 15 symptoms on that image above which can’t be caused by depression.

I wish it were that simple though.

If you’ve ever suffered from psychosomatically induced physical symptoms pre-PFS/PAS/PSSD you’ll know how very real the symptoms of this disease are in comparison.

I had bad health anxiety when I was younger and now look back at some of the symptoms I psychologically manifested onto myself and it’s so clear how ‘fake’ they were. What I experience today isn’t even remotely comparable.

It’s very unlikely. Especially if you have low genital sensitivity. It’s not generally seen in depression but very often in PSSD and PFS.

I think chronic depression, anhedonia etc is just another symptom of a network of problems.

Unfortunately for us trying to treat the symptoms doesn’t fix the core issues. I think having a good mental state is essential but since getting this disease from accutane, I can count on my right hand how many days out of 4 years I’ve felt truly happily.

I think if we discover what causes this condition it could help so much more than just us, depression itself must be epigenetic in nature and that’s why many of us can’t simply just get better from standard treatments.

Right now the medical solution is throwing chemicals at issues we don’t fully understand, I’m not saying antidepressants don’t help people they obviously help certain people, but it’s not a one size fits all situation and I feel like with this condition, everyones symptoms vary so much, it’ll be the same in regards to tailored treatments.

I count 18 symptoms on your chart that I still experience three years into this hell.
Depression, while only one of them, certainly did not cause all the others!.
@Noukon

Depression can cause low libido and all other symptoms.

Can depression cause bony fingers, shrunked muscles, choking on foodpipe, extreme bone and muscle pain, losing balance while walking, changes in posture, extreme brain fog to even sign a paper?? PFS is not about having your dick numb, it’s about that surreal overnight transition from a healthy state to a dead zombie. I don’t think u even know what pfs is ! Enough of propaganda please.

I find it kinda ironic that before getting PAS I used to have some depressive symptoms, but I didn’t have any sexual issues. And now the situation is quite the opposite, many of the most disturbing mental symptoms are gone but I’ve already experienced a variety of sexual issues that tend to get worse. And of course there’re plenty of physical changes that are frustratingly obvious now.
So I believe depression is just another symptom, not the root of all evil.

@Noukon when I first went through this PFS , every doctor or specialist I saw tried to say it was Depression . I paid so much money for medical care at this stage and each time they kept trying to palm it off as Depression without doing any lab checks, hormones , bloodwork etc it pissed me off so much as I don’t know how much money I threw down the drain .
I had tinnitus, severe insomnia (0-2 hours sleep every night) , anxiety/tremors, ED, gynecomastia, Anhedonia, and low libido.

Out of all the medical people I saw , the one that eventually believed me was the Psychiatrist (out of all the people I thought would actually blame it on Depression!!)
My regular doctor wouldn’t even grant me bloodwork labs as he thought it was all in my head, but my psychiatrist referred me for all the physical checks and really investigated the Finasteride Syndrome.

Although, at first he didn’t believe me either! I remember the conversation I had with him that won him over . I just broke it down to him sequentially and simplified (as I was so fatigued and tired with being ignored this seemed my last ditch effort)

Me: can tinnitus be caused by Depression ?
Psych: yes

Me: can insomnia …and I mean severe insomnia of 0-2 hours a night, be caused by Depression ?
Psych: yes

Me: can Anhedonia and a sudden loss of pleasure and motivation be caused by Depression?
Psych: yes

Me: can low libido and erectile dysfunction be caused by depression ?
Psych : YES!!

Me: ok. Can gynecomastia and the unilateral swelling of my left breast tissue , be caused by Depression?
Psych: (long pause) ……(sigh)
Psych: No.

It was this moment that my Psychiatrist believed me and worked so hard to help me get to the bottom of things , even stepping and arranging physical bloodwork’s and labs. I was always so greatful.

I really feel Doctors these days are palming so much stuff off as ‘Depression’ related, when I feel there’s often physical reasons that they don’t bother to look for .
On the other hand I do hear what you are saying about changing mindset though, I feel 80% of my recovering has been through mindset and by not giving up , even when I was 18 months of still feeling like continuous shit .

Try this on for size: PFS actually nuked my pre-existing depression. Before PFS, I did have actual, down-in-the-dumps depression. I also had extremely high sex drive, lots of muscle, etc. PFS took it ALL away. It left me with no emotions, aka anhedonia-type depression.

So don’t ever try to pin PFS on depression…that’s just a Merck shill’s argument.

I really feel Doctors these days are palming so much stuff off as ‘Depression’ related, when I feel there’s often physical reasons that they don’t bother to look for .

It’s human nature. We don’t like being uncertain, so when something can’t be explained with our current knowledge we tend to make up something that we think fit.

“Depression” is a one size fits all type of diagnose. Actually depression isn’t even a disese in itself but rather a symptom of various origins. Most of them are physical, not mental to begin with.

That’s because high serotonin is a coping mechanism, so all antidepressants do is making it easier to cope with being depressed. They don’t really “cure” depression (in most cases). Of course having to little serotonin is also bad because you need to be somewhat agreeable to form social bonds etc and it also increases neurogenesis (decreased neurogenesis can lead to depression).

I see where you are coming from with this post since there are a few overlaps between depression and PFS. I think however the depression is directly related to the outcome of the drug and what it did to the dopamine system and hormones, etc…prior to PFS, I recall caring about reward, wanting to have fun, etc… But with it, it changed my reward circuits which likely (with many other symptoms) led me down the road of depression which likely is making other things worse.