Any hope for baylor research this month?

This part is already ‘‘leaked’’. Although admins here think it’s not the case, I think this is the part one of the baylor study releases, and the other more important part will release later. When? No idea. 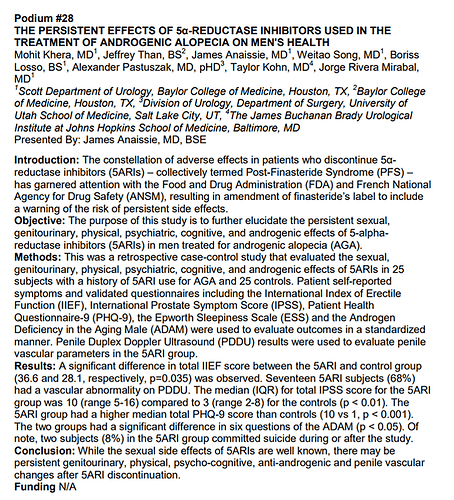 Some user mixed up Baylor with another study. So we have no insider info of Baylor being released soon.

It’s really annoying how long they are taking but imo what’s the point or not considering it forever? It has potential critical information we need.

At the same time it’s not the only bit of info we need, so it would be nice to get everyone to participate in the 23&me project and other projects so we can get funded and do our own private research which would be lightning fast compared to Baylor.

Surely then Baylor would publish somewhere in between all that according to the time it takes to publish.

where are we currently at with the 23 and me project and others? it would be great if the leader of these prjects keeps everyone updated here on how close we are at with these things and how much funding we need to get these things moving . im sure many users here would happily invest if they see what progress has and is being made on these things imo. cant we be in touch with the people at the top on the post finasteride site who seem to be running these things?

They do keep us in the loop, so not sure what you’re talking about.

Awor also said over the summer that a mid 6 figures sum would be a great start for our own tests and 7 figures would be ideal.

Can you at least fill out the survey? It would help us out on the funding part.

sorry i am in the dark with everything , yes for sure i will, where do i find this?. whats the figures at so far?

Have you signed up to take the post drug syndrome survey? This topic is for you Community Projects

Hello! If you wish to take our post drug symptom survey, we want to say that we are very pleased to have you take part in this extremely important piece of research. This is a very simple guide. You can find more info in the first post of this topic: https://forum.propeciahelp.com/t/post-drug-syndrome-survey-faq-survey-now-live-please-participate Step by step guide: Sign up for a forum account (please choose an avatar too!) Create and post a member story. Tell us how you got here. Click this…

You can see the charts for the survey on the home page at the top.

For the 23 and me making a chart feature will take long time and we don’t have resources currently for it.

But all I know is we need 50 more at least to get a good data set to work with, and 100 more would be ideal for better information.

once the target is achieved whats the next step?

That targets for the survey get reset to another goal generally. The more data we have the better.

Eventually the survey data will be used along with a research paper and other stuff the mods are working on to get high figure funding. That’s when things will be faster and more transparent.

Forget Baylor. Fill out the survey/s , do the 23andme and take care of yourself. We may get info from Baylor some day but its nothing to sit around waiting for. I suspect that parallel treatments involving different type of CRSPR technologies for orphan diseases will becoming likely possibilities for treatment in the next 3-5 years. Sit tight, eat well, exercise, live your best life and someday life will be that much sweeter.

Hi @annony24567, you can find more information specifically about the the 23andme project here:

Dear members, We are working to conduct a Genome-wide association study(GWAS) across patient groups based on the SNP data provided with the DTC genetic testing service 23andme. We will be using high powered software and computing resources to perform a research project for the community. We are hoping to identify associated SNPs, and possibly observe similarities between those suffering the respective conditions at the genomic level. It is hoped that this information will help us and our scien…

There is more information about this in the first paragraph of this post: Is it possible to have the avatar marked with a checkmark after completing 23andme, similar to the checkmark from the survey?

More broadly, please give our Action Guide a read for all of the current initiatives that you may be able to contribute to: New user? START HERE

Forgive me if im lazy but I find it hard to understand were and how I should find the 23andme survey? I will gladly participate but when lurking different threads its my understanding that is difficult for me as a Swedish citizen to use the full 23andme compared to US citizen?

When it comes to the Baylor study, why should we suddenly forget about everything? And why is it so hard to have an discussion about the study? I understand that the PFS foundation is in control but wouldn’t be better to have an transparent take on it? I can accept that we are a low priority group (pfs suffers) but I do not want to be hold in the dark, thats worse.

a gofundmepage would be an ideal starting point to aid research imo. what do you guys think?. weve been in the dark for too long!

@annony24567, the PFS foundation is a registered charity funding research projects into our condition. Donations can be made at www.pfsfoundation.org. Additionally, in the near future we will be instituting direct project funding, facilitated by ringfenced PFSF funding, following publication of the coming research.

Academic researchers do not ordinarily publicise details of ongoing investigations for reasons related to the integrity of the data and process.

23&me project is different from the survey.

you order the 23&me kit (basic one is fine), and send it back for your gene tests. then you upload the raw data here in a dropbox (its somewhere on here, im sure a mod can assist you once you get there).

ignore the people that are saying baylor wont be significant or anything, they are just shouting their pessimism.

the truth is there’s a good chance baylor will be very significant and will make a lot of noise when they publish.

but even if we had baylor we would need more information, hence why the 23&me gene project. on top of that we need funding to do our own tests hence why the survey etc etc.

what is the process like to get ringfenced PFSF funding? suppose the research is published, what would be a time frame after that?

is this a bank?

only us suffers probably know about the pfs foundation website in fairness none of the public will be exposed to the charity . agofundmepage would spread awareness to the public and get donations

The leaked Baylor document mentions that two people in the 5ar study group committed suicide. That must have caused an impression on the researchers and reminded them of the seriousness of this condition.
I think at least one person from the Harvard study committed suicide.
The forum has recorded 60 official suicides from PFS when the real number could be closer to a 1000 worldwide.

I think the vast majority of us here have made no attempt to get Propecia banned. We simply hope that Baylor publishes something that can help us to identify an area for further study.

At best maybe there’s a drug label change in the side effects. Now add that to a possible cure and the FDA maybe more than happy to keep Propecia on the shelves forever.

I read something about Accutane causing 3 suicides in one school yet the drug is still available.

It seems in the eyes of the FDA a nominal amount of patient suicides is not enough to ban a drug.

The future of medicine will be using patient DNA to determine which treatments will work best saving time and money. So ideally patients will know if they are suited to say Propecia or if it will cause them lasting symptoms.